We had pretty much the usual crew for this month’s chouette, plus Edmund, who hasn’t played with the cube before, and so was relegated to spectator status. But we enjoyed meeting him and may have started him further on the path.

We experienced two new technical difficulties through the afternoon. First was a game between Tim and me, I was the box, but somehow got confused about that and when I was ready to cube, I interrupted Mark F and Bryan’s argument about a position from the prior game to ask them if they wanted to join me. They did, and about six moves later, we realized that wait, they shouldn’t cube against their captain. We settled that by basically putting them out of the game, and Tim and I just played it out. Second was a game between Bryan and me, he was the box, and about halfway through we were in a position when we both wanted to count. At which point, we noticed that one of my checkers hadn’t ever made it onto the board. I was in favor of restarting the game, but Mark F said we should play on, and that checker wouldn’t count towards gammons. We settled on letting Bryan choose, and he went with playing on.

My reckon is that at this point, I’ve probably now seen everything that can possibly go wrong with a chouette. I also reckon I’m tempting fate by saying so.

This is a position that came up in a different game with Bryan. I’m the box, on the bar, and have just been handed 4 cubes, turned up to 4… We had put them back to the side before I took the picture though, so spoiler alert, I dropped: 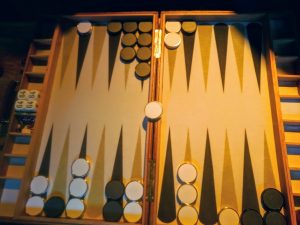 We’ll do the next chouette on March 16th, squeaking in before NCAA March madness makes it impossible to find a table at Claudia’s.