We had a good turnout for this month’s tournament, considering the sunny weather attracting people outside and the coronavirus scaring them into staying home. 8 people showed up to play, plus newcomer Esti, who wanted to observe, having only taken up the game in the last month or so.

Joel showed up early, and we played the first game or two of a warm-up match. But people were showing up and we didn’t get to finish, which was a relief to me as I was down a couple of games. Random draw, however, put me back up against Joel in the first match. Grateful for the fresh start, I went on to lose the match by a considerable margin.

Bryan, Philip, and Joel also won their first round matches, and we shuffled players around. After the second round, Joel and Chris were undefeated. Mark J decided to head off, and Jenny played a match with Esti. Philip, Jenny’s father, noted that he would never have bet that she would end up tutoring someone else on backgammon, so shortly after he finally convinced her to start playing herself. 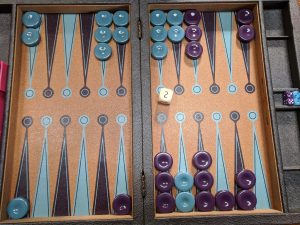 Here’s a position that came up while Jenny and Esti were playing, which I was watching and talking to both of them a bit about the cube. Here Jenny is the lighter checkers, and offered the cube. Should Esti take?

Definitely not. With any 2, a sixth checker will get sent back, and although they are only behind a 4-prime, Jenny will have perfect freedom to bring the rest of her checkers around. Without a 2, there’s still a good chance that both Jenny’s back checkers escape, and Esti doesn’t have the timing to keep her home board from collapsing.

XG actually says this position is slightly too good to double, it’s about -0.034 to give up the gammon potential. And of course, it’s a huge pass for money.

While all that was going on, Chris was playing Joel for the championship. Chris took an early and commanding lead, but Joel survived the Crawford game, and then won the next game with a doubled gammon to take 1st place! Don’t feel bad for Chris, though – second month in a row that he’s cashed in one of our tournaments…

Joel very kindly donated his winnings (that is, less his entry fee) back to the club to help offset the expenses of running the meetup. That’s actually the third donation I’ve gotten in the last year, I want to acknowledge him and  also say thank you to Dirk and Steve who also both spontaneously gave some back to the club. Meetup has just raised their rates, and it now costs just under $200/year to keep that running – so my $10/month rake is not really cutting it. I’m not complaining, it’s a modest expense, and I’m only out $202.34 for the past 3.25 years that I’ve been running the club. Yes, I am keeping records of that. I don’t know how much money I’ve lost in chouettes over that same time period, but I’m pretty confident it’s more…

Next month I’ve moved the tournament back to the third Sunday of the month, to not conflict with Easter. Hope to see you all there!