As I mentioned to a few people at the last meetup, my daughter is moving to Switzerland. My wife and I spent a week or so over there helping her tour the country and then get settled in. While in our first stop, Zurich, I happened to be in town the same time as their weekly chouette, and so I thought I would share some impressions.

They play weekly, on Wednesday nights, at Cafe Bubbles. The owner is one of the players, and quite sharp over the board, but prone to wander off to help customers and chat up passers-by. Half the time I was there, someone else was making cube decisions for her and she skipped multiple turns. But it seemed to work out. They had 4 playing when I first arrived, and a couple more arrived after the first few games. They split to two boards, having everyone roll a die to decide which table they would go to. I was one of 4 on the original board, with Bobbi (the cafe owner), Jacque (the event organizer), and Andres (the scorekeeper). With 3 or 4 players, the rotations happened quickly enough that I quickly lost track of time.

One of their rules was they played for only 2 CHF/point, which is about $1/point purchasing equivalent for us. It made for a friendlier game – people weren’t afraid to make a dumb take in hopes of keeping the box because of stakes for instance. I certainly wasn’t. About 3 hours in, Andres noted that I had been having the longest streaks in the box of anyone. I asked him if I was up, and he said “Yes, by one game!” That’s the kind of night it was. I took the box again the next time it came around and held it for about an hour and half, then bid my adieu.

There were a couple of differences they used from how we’ve run our chouettes. If the first roll both the box and captain had the same roll, it was the box’s choice whether or not to do an automatic double. I don’t think I exercised that right, but it happened with Bobbi in the box every time she was able. They allowed beavers, which I saw happen once or twice. They re-rolled if a die ended up on top of a checker. At one point I mentioned that in America, we’d play that, and thereafter that became a joke for the evening if a good roll came up: “American rules?” The other joke of the evening was based on my non-existent German. We had a conversation about whether or not it was rude to call a roll in advance. I said I didn’t think so, because the dice never listen to me anyway. A few rolls later I called a roll, in German (I can count to 6…) “That’s the problem, the dice only speak German!”

Jacque had his laptop and checked a few positions in XG when it came up. At one point, I had the box and the cubes, a huge racing lead, and needed to jump past a point to avoid leaving a shot against their closed board. I hesitated for a while, thinking about whether to re-double them out. Turns out, the redouble was a huge blunder! This is approximately the position… 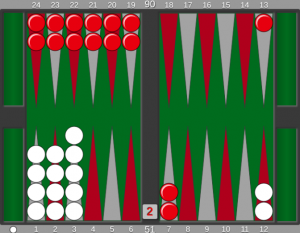 I might have been crashed a little more forward, their board might have been slightly weaker, but it was about this. This version XG says is a beaver if I had redoubled! Well, I didn’t double, but I did roll double 6’s, then cashed it.

The other position that I remember is because I was the one who photographed it and put in Mobile XG. Here’s the position: 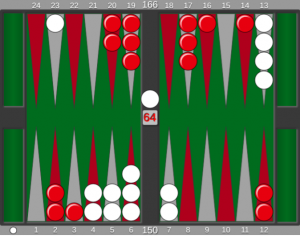 This time it’s red’s roll, and there was a question whether or not to double. The captain chose to double, the rest of us decided not to, and it is in fact a blunder to double.

So if you’re ever in Zurich on a Wednesday night, stop by Cafe Bubbles and tell Jacque I sent you. Viel Gluck!

This was what I was dreaming of when I created the Patio Series – a balmy but not unbearable afternoon, a shady patio, some good beers, and some enjoyable backgammon. APEX was a decent spot for the meetup, but probably not one we’ll go to again – the only beverage choices are beers and ciders, and no food choices, and modestly strict about outside beverages given they don’t offer coffee even. So it didn’t work for everyone for refreshments. On the other hand, we weren’t hassled at all.

Having learned from the fiasco at Prost!, I did bring spare boards this time. We didn’t need them – Julie, Martin, Kris and Tim all brought boards, so we were set. We had 6 people initially, and so settled into 3 pairs. Jarom showed up about 15 minutes late, but we were able to deal him in no problem.

My first match was against Martin, and it was one of those one game matches. Martin doubled me early, I had a chance to redouble later, and then pulled off a gammon. I wasn’t nearly so lucky the next round. Jarom and I went back and forth – he took the first game or two, I rallied to 4, he survived the Crawford game, and then pulled off the remaining games necessary to take the match. I ended up by playing Julie, who proceeded to not only win, but to frankly slaughter me. It was fun!

Martin had a chess buddy who was hanging around, and made a poorly advised bet, that if Martin beat Kris that the group would have to buy him a drink but if Kris won, he’d buy everyone a drink. Naturally, he left before the match was over. But Martin knows a free drink when he hears one – I’m not saying he threw the match, but that was one we were all rooting for Kris. After that, Martin threw in the towel, so he only got two matches out of the day. Somehow, we ended up with everyone else getting 3 games, though I might have had 4. It’s a little fuzzy now. Tim took first place, Jarom took second, and I took off while Julie and Kris finished their third matches.