We had a decent showing today for the tournament, in spite of the sunshine. 10 people showed up to play, and we had a pretty good time.

I got to play three matches, which most of us did. First against Tony, who returned after an extended hiatus, and who is another Vancouverite. We need to get a few things going North of the Columbia… Second was against Nate, who brought his shiny new board – another Crisloid. That brand is becoming the local favorite, between Nate, me, Michael, Julie… and I think I’m missing a few. A couple of photos in a second of that board… And third, against Mark F, who defeated me to take his third tournament win in three appearances. We’re lucky he doesn’t show up more often!

Just kidding, I always learn something playing Mr. F, and today was not an exception. In my first game against him, I got lucky early and was able to double him out, taking a commanding 1-0 lead. In the next game, I got to the following position, and had to decide whether or not to double him again. 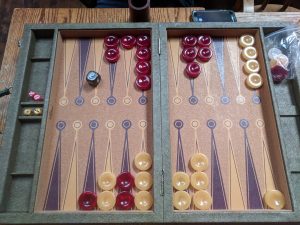 I’m the cream-colored checkers, aiming for the bottom left, and this is Nate’s new board. More importantly, it’s a correct double, and a take. It would have been a -0.047 error to not double in this position. When I first put it into XG, I somehow entered it with the blot on the 12 as already off the board, and teased Mark that it was a drop. He reckoned that I needed about 4 more in the race for it to be a drop, but XG says I only need 3. Move the blot from the 12 to the 9, and it says this is a double/drop. Still, shows how exact Mark F’s instincts are for this kind of thing.

Same game, a bit later, he had the opportunity to return the cube to me. 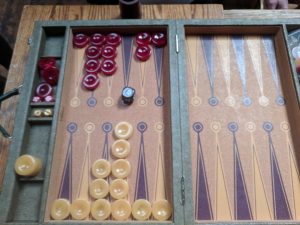 Now, obviously, this is a pass for money. Obviously, this is a pass when I’m not 4 away from skunking him. But it’s not obvious to me that it’s not a take given the match score, even now, hours later, with the benefit of XG pointing out that I’m an idiot. To get it to a take, I have to put one of his checkers back on the board, on the three point or further back. Or, move a couple of checkers from the two point to the six point. Basically, I’m nowhere near a take. But I was so confident, that I bet him $5 that it was a take, and so I lost to him on that too.

Well, it’s good to have more to learn, I guess.

Mark F also encouraged me to bring back the annual rankings, like I had a couple of years ago. I’ve already recycled the score page from January, and the Elo score calculation is too much work, so I’m going with a simpler metric – total games played and won for the year. That’ll give three possible “player of the year” definitions – most games played, most games won, and best winning percentage. Since I, by definition, am there every time, I’ve got a good shot at the most games played portion, but currently Ed is in the lead on two metrics…

We’ll do it again next month – see you then!