We had a tremendous turnout for today’s event – 16 people showed up to play, and a couple of others showed up to either watch or just to register for next month’s “big show” (hint, hint, go to http://pdxbg.club/2018-portlandia-open/ to register!). I decided to split us into two brackets in order to make sure we got done in reasonable time, and we played from 1:00 until a bit before 4:00.

Here’s a position that came up in my second round match against Justin. I am up in the match 2-0, but had been in some trouble and aiming for a backgame. My previous roll, however, was a double-6, pulling all my checkers off the ace point and leaving me with this weird position. Justin stared at it for a while, and offered me the cube (I’m red in the picture below). What would you have done? 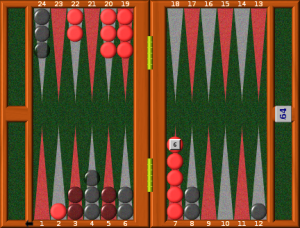 So one way or another, the match score is critical to the cube action right here. I’m going to go with Extreme Gammon, because after all it’s supposed to be the stronger program, and also because over the board I did in fact drop.

We have our monthly chouette next Saturday, and possibly (possibly) another chouette in early/mid March, but the next tournament event will be the Portlandia Classic. Registration is starting to pick up, and I’m hoping we’ll have 60+ players. See you there! (hint, hint, go to http://pdxbg.club/2018-portlandia-open/ to register!)

We are just over a month away, and things are falling into place. I still have only one registration form sent in, but there are a half-dozen pre-registrations through meetup, and I got an email from one out-of-town attendee asking me for the hotel registration code, so I still trust that people will come. I was at the San Antonio tournament earlier this month, and talking to Bill and April, both assured me that most of the registrations will come in the last few weeks leading up to the event.

San Antonio, by the way, was a fantastic event at which I played very poorly. But it was super nice being right by the river walk. The other thing I talked to Bill about was he strongly recommended picking a venue that people would want to bring their partners or friends along, and San Antonio delivered on that regard. My partner came and helped run the desk for a while to get a sense for what to do, and I think that will help as well. Also, I brought about 3 dozen fliers to the event and I think they all got picked up, so maybe a few more registrations will come from that direction.

I have a good start on the various props we will need – the trophies are in my possession. Well, we’re doing plaques actually. I did not go big on the trophies, but I think they’re pretty nice. Earlier this afternoon, I finished paper-cutting the score cards that the print shop only cut into 3rds, when I wanted 6ths. Loads of fun!

The big concern on my mind now is planning for the brackets. I need a game plan for anywhere from 12 to 64 players in terms of tournament design, and I need to be able to run people down into not just a consolation bracket, but a last chance. The checklist of other items to bring I got from USBGF is also intimidating – it’s based off the LA event, and says bring 12 spare boards. I have 4. It says bring 32 clocks. I have 2, on loan from a co-worker who is big into chess. We’re not going to be as big as LA, and I’m going to have to let some stuff slide.