Tournament games are 3-point matches with Crawford rule. The idea is that a short match lets even a beginner occasionally get lucky against a pro, and it also lets us get through the matches fairly quick. We do not use game clocks but quick play is encouraged. Tournament structure can be either a double-elimination bracket or a round-robin, depending on turnout – we try to make it so everyone gets at least two matches. Once you’re out of the running, though, feel free to stick around for more one-off games.

Tournament stakes are optional – those that choose to can ante in. Those that don’t wish to can opt out. If you were “in” and you win, Payday! (actual ante, payout schedule, etc. TBD by Mark or guest host – typically top two or three walk away with something.)

We’ll have at most 5 players per board. Bring a board or at least your own doubling cube. BE PREPARED TO PAY OUT UP TO 30 TIMES THE POINTS/GAME. We’re a friendly group, but not necessarily friendly enough to take an IOU… 🙂 If you have to cash out early, mid-afternoon settlements are always an option.

The following rules to be in effect:

1. Jacoby rule
2. No consulting before the turn, that is, players other than the captain don’t get any input until after the first double/take/drop decision is over. Redoubles, you can talk about why you’d want to or not. EXCEPTION: to speed up play, players are free to share the pip count at any point.
3. No minority hold-outs (if 3 of the 4 (or 2 of the 3) playing drop a double, the last player has to take the drop as well). EXCEPTION: if there are only two players on the team, one person dropping is not a majority – if the captain drops or gets dropped, the #2 moves up to the captain mid-game.

Past few months, we’ve done this one the first Saturday of the month, but this month that would be two days in a row of backgammon with our second Sunday tournament; probably go back to first Saturday again in February…

On a cool and wet Sunday, 5 of us gathered at Circa 33 to play our last Second Sunday tournament of 2016. Five people being a small-ish turnout, Rob suggested a round robin format.

We had two newcomers – Julie and Ben – who comported themselves quite well. There’s a slightly unusual situation in the results, because in the final round, Rob and Julie called it quits when they were at 2 games apiece – Rob was down for the night and out of the running, and Julie locked in for second place, and it was getting late. So I scored each of them as getting 1/2 a match for that one. Reminder that since Julie and Ben were new, they start at an Elo score of 1500. And our rules are that in a round robin tournament, the winner of a match can walk away with up to 4 points, for instance if they win a gammon in the final game. Results were as follows:

I took a couple of positions in my match with Paul because I wanted to check them against the computer. Both were doubling decisions, positions where I in fact did offer Paul the cubes. In the images below, I’m black. First one was in our first game, I had him on the bar and felt like this was a little aggressive. Would you offer the cube? If you were red and offered the cube, would you take? 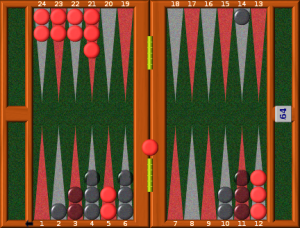 GnuBG says this is a good double, and a pass for red. Paul did in fact pass.

Second position was similar, in that Paul was on the bar again. Keep in mind that this time, he’s down a game. 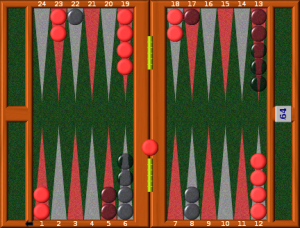 This one also felt aggressive, and in fact it is too early to double. Paul properly took, and redoubled me a few moves later – which is proper. Down 1-0 in a match to 3, if you own the cube it does you little good to hold it. However wise Paul was in his handling of the cube, though, I did manage to hold on to win the game.

We’ll be back for another on January 8th – hope to see you there.

We had five people turn out – same crew as last month – and broadly similar results. We really need some reinforcements to show up to keep Mark F. from walking away with the match every time! Someone cart Martin back in…

Play started a little late, using Paul’s board, Mark F’s precision dice, and a motley assortment of doubling cubes. We took a table just by the door, where the noise level was lower and the lighting was better – and the door for smokers as close as possible. Play was more or less even for a few games, until Mark F took the box for the first time and held it for 3 games. From there, he never got close to break-even again, although a few others did. Me, I was sinking like a stone. 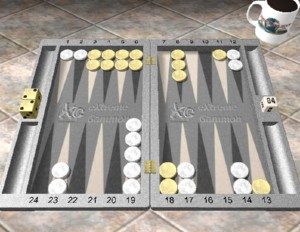 Here Mark F was white. If this looks like a massive drop – you are correct. However, because we were playing with the Jacoby rule, there’s no gammon chance unless the cube is offered. Thus, it is only a minor error to not turn the cube here.

I realized after I got home that I should have taken some pictures myself to include in this post. But – there was one position of note that I remember all too well. Here it is: 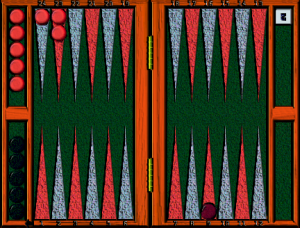 In this one, Mark F is the box, in red. Paul was captain, with Nick and I the field. Rob had cashed out earlier and missed this fun. Anyway: Paul had kept Mark trapped on the one point during bear-off, and we were heading for not just a gammon but a likely backgammon! With five chips on the two-point left to bear off, Paul rolled doubles, leaving a blot on the two-point! Which, naturally, Mark hit. He proceeded to keep us on the bar and/or hit us until he was well into his own bear off. And when we got to the position above, he did us the favor of returning the cubes.

Now, I’m putting this back together from memory – it’s possible there were actually two chips on his one point and one on his two point instead. But the dynamics are the same. Question: is this a take?

Nonetheless, Paul and Nick said no. I took, Mark F. did not roll doubles, and I got to make the final roll. 27.8% skyrocketed to only 33.3%, so sadly not a redouble opportunity. I shook the cup vigorously, and produced a 5-3. So close. Well, even when it’s the right decision, it doesn’t always work out.