We had a great afternoon of backgammon again today. Nine players showed up to play, and so I had to make the difficult decision to cut one player. Makena drew the short straw, but gamely stuck around to watch and learn, and got into a post-tournament match and some chouette action. Chris (yes that Chris) showed up to watch as well. Pete and Molly came down from Seattle, Mark S came up from Drain, and Martin, Arto, Bryan, Michael and I rounded it out. All in all a pretty good showing!

In the first round, Martin won over Pete, Arto over Molly, Mark S over Bryan, and I won over Michael. I didn’t get all the scores, but my sense was they were all 11-10/11-9 kind of victories – closely fought matches.

I took an early lead against Michael, and in our 4th or 5th game, he offered me the following cube, when I was leading 6-1 in our match to 11: 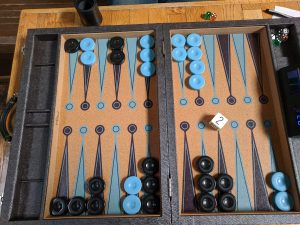 We’re bearing off to the left, so I have three checkers back and a couple of blots on my home board, just to orient you. The theory I like to think through for doubles is “Position, Race, and Threat”. Here, the position is slightly in his favor – we both have two point boards, but he has the more advanced anchor and only two checkers back. The race is pretty even – he’s up 134 to 135 and on roll, but that’s not a major disadvantage. Threat is also pretty modest. So he’s got a slight edge on all three but not a big edge on any of them. For money, it’s not even a double. But being behind in the match, he figured it was a fair double. After some thought, I took. What do you think?

XG says that this is in fact not quite a double, and a clear take. It’s a -0.057 error to double. Curiously, if he held the cube, it’s a good redouble! Match score must play into it somehow, but I can’t figure it out. Anyway, he doubled, I took, and he proceeded to win by a gammon. I take consolation that I correctly took the cube.

Second round, I faced off against Mark S and Arto sat down against Martin. In our first game, I reached this classic end-game cube decision point: 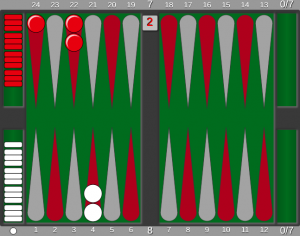 In the meantime, Arto was losing a much closer match to Martin, and we were getting close to finishing the tournament. Martin and Mark S faced off, negotiated a hedge, and went to. I got into a chouette with Bryan, Molly, Pete, and Makena. The tournament wrapped up an hour or so later with Mark S nosing out Martin, but the chouette went about 3 hours more.

A big thanks to everyone for coming out, it was a blast, and I will do another one before too much longer.

We had an excellent showing for a drizzly Sunday afternoon – 18 players! That’s nearly a record. Lots of newcomers, and lots of long-time-absent returnees. Bob made the drive up from Eugene, becoming this month’s most traveled player, and put in a very decent showing. Chris and Janelle made their first visit, and in spite of no match wins, they at least didn’t have to play each other at any point. Arto from Armenia was not the most traveled player because he lives in Portland now. Marge hasn’t even unpacked but showed up to play. And Makena – well, we’ll get to Makena.

Note to myself, when the group gets that big, it takes a lot of rounds to finish the tournament. Multiple people felt the need to leave before we were all the way through, which was fine. But it created something of a timing issue, especially for the final.

I started off playing Chris. Not that Chris, the one that came with Janelle. We had a good match, in spite of the lopsided score. My second match was with Arto, who talked about how he grew up playing without the doubling cube, but who has obviously learned since. He said he was in Vegas for a while, and I think he used the same “gifted amateur” language that Steve has used. Apparently, a stretch of time in Vegas is going to improve your game. But I somehow squeaked out another win.

By that point, the field of undefeated players had narrowed a lot. Nate had a victory over Chris (yes, that Chris) and Bob, Julie had taken down Tony and Brad, and Makena (remember Makena? I was coming back to her) had beat Judy, then Martin(!), and was in the process of beating Bryan(!!) She was talking about herself as an innocent lamb, but don’t buy it.

I sat down to play Julie, and we had a heck of a match. I won the first one, then lost the second one with the cube turned by a gammon! By this point both Nate and Makena were waiting, but I didn’t want to pit them against each other because that would have set Makena up for a five match path to victory. Instead, I set Julie and I up for a five match path to victory, declaring that the winner of our match would play Nate, and the winner of that would play Makena. Thus, the timing issue. But at least Nate didn’t have to wait long, because Julie crushed me in the Crawford game too.

By this point, a chouette had broken out among the people who had done their three matches, and a few who had only done two. Nate went on beat both Julie and Makena (who learned a lot about the mechanics of chouettes in the interim). I had to leave around 5 for a dinner thing, but they sent me the results.

Year-to-date results for anyone with at least 6 matches in a tournament now stand at:

We meet again on Saturday for the special Jackpot, single elimination, high equity tournament. If 18 show up for that one, two of them won’t be allowed in, I don’t want to have that many byes. That’s not a crazy problem to expect – there’s been a rush of late RSVPs this week… We’ll see!