I’ve been neglecting the blog for a while, sorry about that. We’ve had a couple of tournaments and a couple of chouettes since the last time I posted, and those results are around here somewhere, but I don’t have any fun backgammon puzzles from them anyway; so instead here’s a bit about my time at the 2018 Vegas Open.

I got in around lunchtime on Thursday, plenty of time for the 2:00 kickoff. I lost my first match to Thomas, who went on to win the intermediate main tournament, so in that sense I came in second! I rebought, and was down around 6-0 in the next match when 5:00 came around, and they announced that any new rebuys had to happen right then. I conceded and rebought again. And the third time – I lost again. I went to get a late dinner and a little sleep, hoping for a better day on Friday. 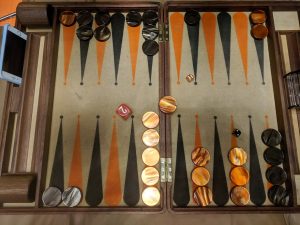 I’m on the bar against a three point board with a blot, but I also have no particular board going. 20 numbers cover the blot, and a couple of things hit the last checker on the ace point. It ain’t good, in other words. There’s certainly more than 25% wins, but a lot of my losses are gammons. I dropped, and XG agrees. This was a pretty close double – no double is +0.964 equity, so I am proud of myself for recognizing that I should drop, because often I’m too optimistic about positions like this. Match score played into my thinking, at that’s correct too – at a 3-3 score this would be a take.

Saturday was a lot more mixed. I won a few, I lost a few, and mostly it was a long day.

One of my more entertaining matches was the $100 jackpot, where I only survived one match against Joe. This position came up in game 5, when I was down 4-1 in our match to 7: 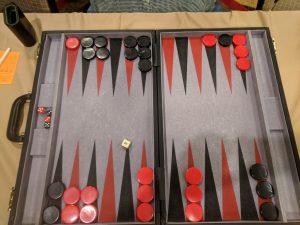 In some ways similar but not as extreme as the prior photo – I’m in trouble with a couple of possible hits on this next roll and a 3-point board against his 4-point board. I’m again over 25% to win, but a lot of those losses are gammons. But being in as much trouble as I was, I correctly felt it was a take. XG rates this as a No Double at this score, although a double/take if we were more even.

Having won a blitz on Friday, I got to play in the Blitz Champions Saturday night. Well, I got to play one match anyway. Here I’m playing Lynda for the second time, and we’re tied at 3-3 in the match to 5 when she offered me the cube: 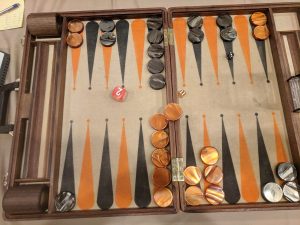 From this set of photos, it sure looks like I was always in trouble, doesn’t it? On the bar, no home board, a weak 3-prime to contain her last checker – sure, but against only a 2-point board and it’s not going to get stronger without likely leaving a blot or two around. I took, as XG later said I should, but as was predicted to happen 2/3rds of the time, I lost.

In the consolation round on Saturday, I lasted one match, against Richard, who went on to win the consolation flight, so in that sense I came in second there too. Here’s a photo from the last game of that match, where I led 6-5 in the match to 9: 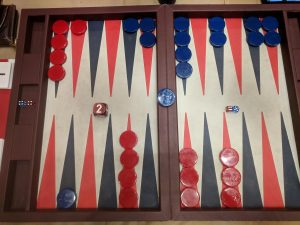 Richard doubled me from the bar, which is always fun. I had doubled him out from the bar in an earlier game, so I like to think I gave him the idea. Anyway – there’s some risk here, especially if he gets a 3. XG puts this as a double/take, which is what happened over the board. Richard is 60.7% to win, and 13.7% gammons. After rolling double 3’s, his win percentage jumped to 89.2% and his gammons to 63.5%, and he went on to get one of those gammons. Ah, well.

Sunday, I got eliminated early from everything I still had going. In the Seniors, I made it to the quarter-finals, and hedged, and lost; so although I didn’t cash in the tournament I cashed in the tournament.

Overall, the Golden Nugget was a nicer room to play in than the basement of the Flamingo. I had a great time, played better than last year, and have a few good lessons out of it all. Y’all should come next year.