April showers bring backgammon players to… ah, never mind. We had a good showing for today’s tournament, 8 players, including newcomer Tom. Eight isn’t a great turnout for us, but it’s great for running the tournament. First round, I played Michael, who seems to have cursed dice. Tim and Chris faced off, and had the *longest* match of the day. They weren’t playing slow, it was just a slug-fest. I forced some people to sit around waiting for the round 1 matches to finish before they could play their second matches, and that in turn forced some people to wait for their third matches. But by the end, basically all the matches ended around the same time. 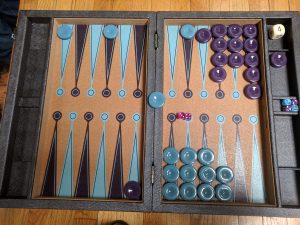 Clearly an excellent roll. I considered 6-3, or 21-18, or I could cover the blot on the 13… There are a few other 3’s of course, but those seemed like the best ideas. And they are, according to XG. I went with covering the blot on the 13, which worked out when Tom rolled a 2-6! Theory met practice, the best play worked out for me.

Of course, I’m not always so smart. Consider this cube that Chris offered me in our first game of our match: 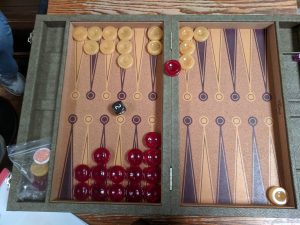 What to do? It’s a good cube, clearly, as he has a 4 point board, and is strongly favored to cover the blot on the ace point. But, even if he covers that, I could pop right out with a 5-something, and the race isn’t too bad. If I hit, I would have good gammon chances. So, I figured it was a take. Nope! -0.053 error, which is (for me) not that bad an error.

Chris went on to win that game, then the next one, then the match, and thus the tournament. Nate, Michael, and I were all tied in terms of number of games and matches won, so I declared a three-way tie for second. Tim, Chris, and I stayed to play a small chouette for a while after, and they relieved me of my second place prize money there.

Updated scoreboard for the year – Chris has the best win/loss ratio of anyone with 5+ games after today:

I’ll get the next one scheduled soon. See you then!