We had a good showing for today’s tournament – 11 players in total. That is, if you were unclear on such things, an odd number, which always makes the logistics a little trickier. I had been trying to balance things such that winning players only play against winning players until we got down to only one undefeated player in our prior Swiss tournaments, and I did so again this time, but with the realization that anyone who has lost a match in the first two is pretty much out of the money. So I did not enforce pairings for third matches, letting people pick their own opponent or just wander off, or whatever. I did not, however, communicate that clearly, so some people are still at the bar waiting for their third match, potentially.

Anyway. Tina came with her whole family in tow, although only three of them played. Tom came up again from Albany, Dirk was on time, and newcomers Brad and Steve added to the mix. By random draw, Tim got Tom in the first round, and I set him against Tina in the second – if he had played a third match I would have insisted it be against Tony for purposes of alliteration.

I drew Brad in the first match, who claimed to not understand or use the cube, but somehow managed to use it multiple times on his way to victory. Brad then beat Tony in his second match. In the meantime, Steve had worked his way through Dirk and Tom, and was playing Billy, our other undefeated player at that point. Steve ended up beating Billy, and I set the two newcomers against one another for the championship. Steve ended up taking it all, leaving Brad and Billy tied for second.

After the tournament, or rather while Steve and Brad were duking it out, Martin, Tim, and I started a chouette, during which the following position came up. 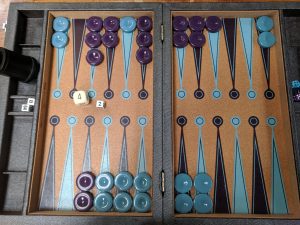 I’m onlyI’m the lighter colored checkers, bearing off to the lower left, and I doubled them both from this position. Tim dropped immediately, and Martin thought about it for a minute, then also dropped. I took a position because it seemed to me that it must be a close thing, given that Martin struggled on the question. But according to XG, it’s not even a double! 4’s are the obvious scary number, but 5 and 6 are also good, and the pair on the midpoint give you something to do with 1, 2, or 3. But I’m only 63% to win, and give up -0.131 equity by doubling. Of course, if you scare the opponent off, it’s not a blunder.