We had a decent showing this afternoon – 9 players! Slightly too many for an 8 person bracket, but we made do. I have been reading some on bracket design, and shuffled it so that we didn’t need to have effectively 7 byes on a 16 person bracket… not sure it went perfectly smoothly, but it worked.

We had two newcomers, Scott and Amelia, plus a few players we haven’t seen in a while, plus a couple of us who can’t help but show up every month. A couple of hours in, Tim found out from the barkeep that the place was closing at 5:00, and so suddenly the clock became a consideration. We’d managed to finish up by 4:30 or so last month, and so I wasn’t overly stressed about it. That is, until the finals were starting at 4:10 or so…

At that point, I was playing Scott for the first/second in the main flight, and Lee and Tim were facing off for the consolation. I figured they would be fine, being as it was only a three point match. But a five point match in 50 minutes is… a little tight. Totally doable, but a little tight. As it turned out, we finished the first game in about 12 minutes. In the second, Scott offered me an early-ish cube, which I was able to return to him just after we broke contact. I don’t recall the exact pip count for each of us, but Scott, I think that was a drop. But hey – second place for your first visit is pretty good!

Lee held on to take the consolation bracket, and we all scattered at a few minutes before 5. Well, Julie and Martin were still finishing up a “just for fun” game.

Normally, I conclude these posts with some statistics about each player’s Elo score etc., but this is the last tournament of the year and so instead I have some statistics about the whole year. In 2017, we had 10 official tournaments – 11 if you count September when only Martin showed up. In that time, we had 49 people attend, and played a total of 354 matches! Gold stars for attendance go to Bryan, Julie, and Martin. Special platinum stars for attendance go to Kevin and Sharon, who only made 5 tournaments each, but drove up from Coos Bay for those 5, so they clocked more miles than anyone else. Our winning-est players are: Mark F, who won 11 of the 14 matches he played in 2017; and Lee, the new guy in town who has won 7 of his 8 matches so far. I can’t wait to watch the two of them go head-to-head next year! Which will probably happen at the big Portlandia Backgammon Classic, this coming March 24-25, 2018. Register today! Or tomorrow. No rush.

We actually met at Claudia’s this time, which is a pretty good place to play. The main advantage it has is that Mark F can watch football while playing backgammon, which appears to make him pretty happy. Of course, he was in a good mood anyway, coming off his multiple wins in Las Vegas a few weeks ago…

Modest turnout – Martin, Mark F, Bryan, and me. I rolled into the box and won the first game, then it was steadily downhill for me. Martin took and held the box for about the first half, Mark F for most of the second half, and then when Bryan showed up we had a bit more alteration.

Here’s one position that came up that I thought was interesting. Well, there were several I thought were interesting, but after running them through Extreme Gammon, this is the one that actually is: 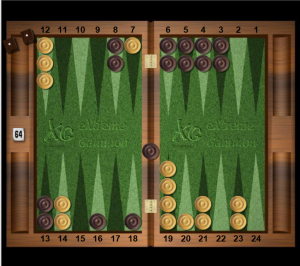 Black is on roll, should he double? The risk is the 9 rolls that dance, leaving White the chance to redouble or roll to put another checker on the bar. On the other hand, black has 15 hits that put white facing a four point board. In other words, this is a very gammonish position. Absent the Jacoby rule, this is a no double/take. But with Jacoby, it’s a double – barely. No double is -0.002 equity error.

Now in practice, I was being offered this cube. As I recall, I passed. I was having a rough afternoon, and felt a little gun-shy. Feeling gun-shy is no way to play backgammon though. Fortunately, this particular one was only a very small error for me. Unfortunately, some of the others I made were bigger. Ah well, there’s always next month!