We had a nice turnout for this month’s chouette – in addition to what I’ve come to think of as the usual suspects, Rob made an appearance, and brought along two new players – Ben & James. There was some logistical confusion due to a last minute venue change, but c’est la vie. Between that and people needing to drop off, we had from 3 to 9 players at different times through the afternoon (and let’s be honest, into the early evening…)

There were a couple of positions that were interesting enough to record. The first came up when 6 of us were playing on one board. I know – we said 5 to a board max, but somehow that didn’t hold this month. 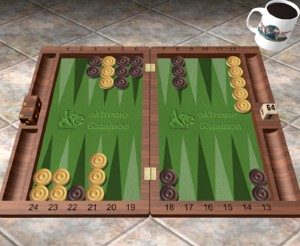 Martin was in the box, and doubled the field, thinking it was a drop. Lucky for me, I was late in the line to declare take/drop, and could just go along with the crowd, otherwise I probably would have dropped. Mark F went first, and confidently declared a take. I think the rest of us were wondering what he was thinking, but lucky again, he explained in the email where he sent this along: “We have an anchor, the race is close, we have no checkers out of play, both sides have 3-point boards, and we have no loose blots.” Extreme gammon bears this out, we were still just over 30% to win, a comfortable take!

The second position, I took a picture of came late in the session, when just Martin, Mark S, and I were still playing. Martin was again the box (again, not still! He had a good day I think, but not like that…), and we had doubled him earlier, and now he had a chance to repay the favor. 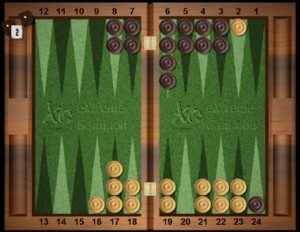 Extreme gammon puts Martin at 74% to win, with 16.45% gammons, and declares it a redouble-pass! One time my lack of courage served me well.

Overall, another great chouette. We might try for a different venue again next month, or might skip a month due to the Vegas Open – stay tuned to find out.

We had a perfect 8 person bracket for today’s tournament. Newcomer Nathan entered the actual tournament, and Kitster came along a bit later to play some side games, which worked out great! And finally, we got to meet Sharon’s father, Anthony, who was in to visit and got dragged into a few games as well. It made for a lively afternoon of play!

In the main bracket, Bryan marched ruthlessly to the first place spot. Second place went to Sharon, who foolishly took a cube from me in our first game but then went on to win over and over again. In the consolation bracket, it came down to me versus Joel, and I was able to hold him off. We wrapped up play by about 4:00, although Bryan and Tim were still playing a one-off match when I left.

Results for everyone are as follows: