We had a pretty decent turnout for a warm afternoon. It helps that there was sunshine yesterday as well. There was a certain amount of confusion as to which Lucky Lab was the right one, but eventually 10 people showed up.

We played one bracket, single elimination, and one round robin tournament. It almost sort of worked. I wonder if a double elimination wouldn’t have been better, but what’s done is done. If there had been more people or 2 fewer, I think the bracket would have been a little smoother. But live and learn – best alternative.

Bryan walked away with the win in the main bracket, with newcomer Courtney taking second place. Hopefully we’ll see her and Justin again next time as well – a little bit of beginner’s luck to keep people coming back and all that. In the round robin, Paul and Martin ended up tying with 12 games each, and so split the prize there, minimal though it was.

I ended up playing Gints twice – once in the bracket and once in the round robin.  In our first match, he had sent quite a few of my checkers back, and I was starting to give up hope that I would get a return hit. But I had a relatively strong board, and eventually the opportunity did arise. A roll or two later, we got to the following position, and I offered him a double: 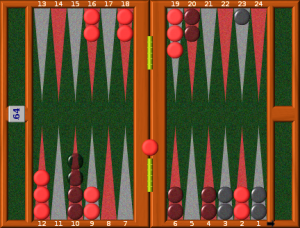 I’m showing it here from my side of the board – Gints is red, facing the cube. What’s the play? I’ll tell you it was a good double, and I knew it right away because he had to stop and think for a bit. Evaluation from both GnuBG and XG say it’s a double. I’m up 61 pips in the race, and likely to get a better position with my next roll. But I do have 3 men back, and no outfield coverage. As it happened, Gints took, and that is the correct action – barely (for me). XG says if my checker on 23 was on 24 instead, that this is a no double/take position. In fact, I managed to pull off my 30% gammon chance, which took us from 1-each to me winning the match. But Gints was right to take, and so that’s the important thing.

In my last game with Paul, we got to the following position, with him leading 3 to 2 in our match to 5. 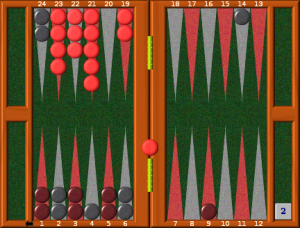 In the game, I redoubled. Risky play, or sensible? Paul took – smart, or overly optimistic?

Now, here the round robin tournament rules come into the decision. Martin had 10 games, Paul and I each had 6. In order to beat Martin, it was necessary both that one of us get to 6 games (most allowed is 1 over the match length), and that Martin win at most 1 in his last match. So, although this is a proper redouble, it would normally be a pass; but Paul took it on the chance that one of us would end the match with 6 games. And so it happened – I couldn’t cover the 4-spot, and was still pulling my back checkers around when Paul came back in, hit me on the way, and went on to recover the game. Meanwhile, Gints was playing spoiler, beating Martin 6-2 in their match – putting Paul and Martin tied. Overall tournament results on player rankings are as follows:

Overall, I believe a good time was had by all. We’ll try another location next month, when we go back to the actual second Sunday of the month on June 10th – maybe somewhere with a good happy hour. See you there!