We had a good showing for our first tournament of the year – 13 people in the tournament! Three additional people showed up too late to get in, but were able to pick up some side games and/or get tips on what backgammon apps to download (hint: Extreme Gammon). Tim D. made it in from the coast, and dragged along Dick, whose daughter Jill made her first appearance. David (who hasn’t made it to one since the big Portlandia event last year) came along, bringing his friend Nate for the first time. And Paige made her first appearance at the meetup as well.

I set up the initial draws, and settled down to play first Jill, and then Bryan. By the end of that second match, the scorecard was getting complicated – Dick and Nate were still playing their first match, as were Tim E. and Justin (who we hadn’t seen in a while as well…) David had gotten a bye but was now playing Martin. Suffice to say I need a better way to keep track of everyone once it gets going – I was assigning people matches but not writing down the pairings until later, and it was quite distracting. I’ll blame the pressure for how Bryan was able to skunk me 5-0 in our match…

This position came up in my match against Justin, and left me pondering for a minute or so on whether or not to hit. 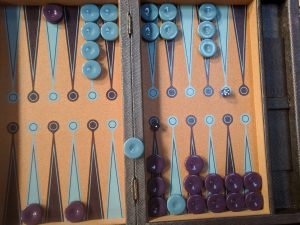 Little hard to see depending on your device, my roll is 5-1. Not the roll I was looking for, but what can you do. The 6/5* seems both obvious and possibly unnecessary. I’m a strong favorite already, why risk the hit? Best I recall, I eventually went with the 15/10, 6/5* to get the most covering numbers, and then Justin rolled 5-5. Oh, well! I came back from it to win eventually.

My fourth and final match was against Martin. In this position, I’m down 2-0 in the match, and am generously (?) offered the cube: 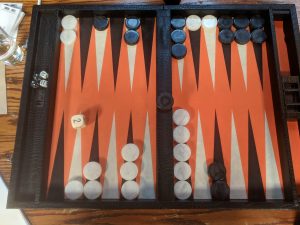 My thought is, I’m about to get buried. Sure, he’s on the bar, but I’ve got no board, three blots, and let’s not forget it took me like 5 rolls to get off the bar (which doesn’t matter, but it was weighing on me). So I passed. Blunder! XG says this is a clear take, and I gave up 0.333 equity by dropping! Fear is a killer.

This next position is from the next game against Martin, and put me in one of those “too many choices” reveries… 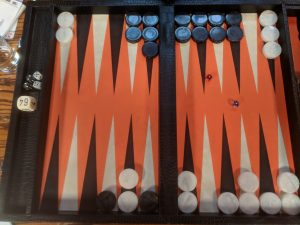 Now a “Swiss” format should always be matching undefeated players with undefeated players until there’s only one left. With 13 players, we should have reached that point after 4 rounds. But somehow, around 4:30, we had Martin and Bryan both with 3-1 records, and Dick with a 3-0. Justin and Tim E. were playing their final match, which was going to end with one of them also a 3-1. And David was playing his third match against Jill, which if he won would put him 2-1 and so I would have set him against Dick to see if they could both end up 3-1. We had, in other words, at least 4 people with 3 wins. Justin ended up winning, David losing, and I had no-one to pit against Dick. So I declared a four-way tie and gave them each equal prize money.

While waiting around for all this to happen, Chris and I played a little at $1/point on Bryan’s newest board – the super big one he built himself. Here’s a cube I offered Chris in one of those money games (and so you can admire the pretty board…) 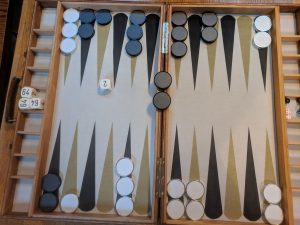 An early double, good blitz potential but a lot of work left to do, and Chris does have a two point board. Chris was focused on the blitz potential but I talked him into taking, which is correct! XG says I’m only 63.5% to win here, albeit with 37% gammons. Chris took, and was able to redouble me out many moves later.

All in all, it was a good afternoon of backgammon. I’m glad so many people were able to resist the sunshine to come in and play. Next one will be scheduled soon… See you then!