We had a great turnout for today’s Chouette – 9 people total. Mark F kept order on the “Advanced” board, where 5 brave souls played for $10/point; while I (mostly) played with 3 others on the “Beginner’s” board at $0.50/point. I say “mostly”, because I did get in about 4 games on the “Advanced” board, both before and after the “Beginner’s” board ran. Martin, Mark S, and Bryan were all still going when I left at 6:30, too!

The action was hot on the “Advanced” board, of course, with Martin coming out well ahead but decent showings for a few others as well. Martin and Bryan are both off to Vegas later this week for the US Open, and so we all wish them good luck.

The “Beginner’s” board was far more relaxed – couple of times people took a double that was probably a technical pass in an attempt to get the box. I had a good run as the box at the outset, which left me well up through the later rotation. Michael provided the board for the first bit, then we switched to Julie’s board when he needed to head out. Paul made his return appearance and I can assure you he hasn’t gotten rusty while he was traveling – he walked away with $0.50 in winnings!

Here’s one position we ended up arguing about for a good little while. At the “Beginner’s” table, we had full consultation at all times, including occasionally the box helping the field or vice versa… Anyway, the argument was, do you come out or do you stay on the opponent’s 4 point? 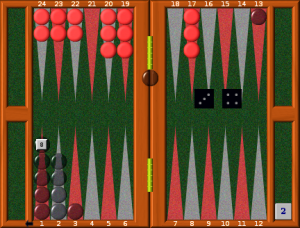 Julie was the captain, and wanted to come out past the bar. Paul and I were not so sure, and thought staying in provided more chance of a hit. Julie went with the escape, and good thing – staying back is a blunder! Black is not in good shape, but has 31% winning chance if he comes out, only 16% chance if he stays back.

Later, in the following position, I offered Julie the cube. Good move? Would you take? 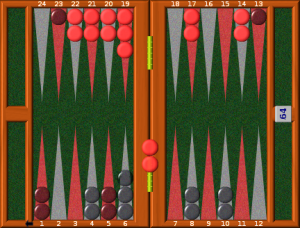 I figured that I needed 5’s to get out, there’s a decent chance that won’t happen, and so this looks like a double/take. Julie disagreed, and dropped. Well, I was off! My winning chances are about 73% according to GnuBG, but my gammon chances are 41%, making this position too good to double! I clearly need to work on my probability estimates. Then again, with the Jacoby rule, it’s a proper double but still a drop. Lucky me, I wasn’t on the receiving side of that cube decision.

We’ll be back at Lucky Lab for a chouette next month, probably earlier in the month, as the second Sunday tournament will be moving to the third Sunday to not conflict with Mother’s Day, and then following that is Memorial Day. So yeah, the schedule will shift a bit. See you then!

We had 13 people show for what is (most likely) our last meetup at Circa 33… Because some people have asked, my reasons for making a change are largely due to the original reasons for us having it there:

We got a couple of good suggestions for a new location, so I will go on a pub crawl over the next weeks and pick one. If it doesn’t work out, I’m not afraid to move it again!

We experimented with a new format too. The fun thing about experiments is that sometimes they don’t work. It was far from a disaster, but it could have gone better. With 13 people, we had not quite enough people for two 8-person brackets, and so naturally I tried to run three brackets! That was also a function of trying to have both a $5 and a $10 entry. Then the side pool question got confusing for people… Well.

By 3:10, I had 7 people signed up for the $10 bracket, so I got that kicked off. 3 people opted for the $5 bracket. Then newcomer George arrived. I wanted to put him in the $5 bracket, as a newcomer, but he insisted that he wanted to play the $10. So that filled the $10. Turns out, George is a professional poker player and no slouch at backgammon – more on that in a bit.

Mark F and Bryan both arrived before 3:30, and I promised them a second $10 bracket. Here’s where my planning fell apart. A few months back, when I visited the weekly tournament in Vegas, they run it on a strict 8 person bracket, once you’re out you have to buy-in to a new bracket. I was thinking people would do the same, but I wasn’t considering that I was using a double-elimination structure still, which meant that no-one was finishing up to enter the third bracket. So Mark & Bryan ended up just playing heads-up. Sorry guys!

In the $5 bracket, Julie trounced newcomers Bob and Aaron, although knowing Julie, she was very nice about it.

In the $10 bracket, Kevin repeated his undefeated approach from last month.

Now let me whine for a moment. My first game was against Sharon, and it was a good match – lots of ups, lots of downs. I barely squeaked by, then sat down to play Larry. It was a good match again: I won, he won a double, I got through the Crawford game, and then was cruising towards a crushing victory in the double-match game. I had him trapped behind my prime, his board was crashed, put him on the bar, started bearing off – clearly victory was mine. Until I was forced to leave a blot, and Larry hit it. Well, that happens, and I had a huge edge, came in immediately, just needed to get around the board and… Larry rolled double 6’s. So now he was bearing off while I was still getting around the board, but no big deal, I had some big rolls, and soon enough we were sitting with me having 5 checkers to bear off and him having 12. Now, he was on roll, but no big deal, the only way he could win was to roll doubles – 3 times in a row. Which he proceeded to do. 1 in 216 odds, I lost the match!

Well, I went down to the consolation bracket to play George, who told me he plays mainly on Gridgammon, and has spent a decent amount of time playing Victor Ashkenazi. Playing online against giants does tend to hone your skills, and so George took me out too, though I think I gave him a decent run for it.

George ended up winning the consolation bracket, which got him his entry fee back, but not his side pool bet. I had declared that the winner of the side pool got it all, and that ended up being Larry. Talk about a lucky guy! Larry placed second, losing to Kevin in the final, but Kevin had not entered the side pool! So Kevin got the winnings for the tournament, but Larry got about twice that for the second place plus the side pool!

Again, a learning experience for me. With the shorter tournament structure, I think next time we’ll do 8 person, single elimination brackets, and if you want to keep going you can buy into a new bracket – Vegas style.

So next month, aside from the venue and the format, it’ll be about the same. Also, in response to Tim’s lobbying, the tournament will start earlier in the day – noon or 1, I think. But other than that, about the same. See you there!