Let me spell out the impact of the logistical challenges – at one point I put someone into the wrong line, which meant when the next person moved down, there was already a match happening there, which meant that there was a cascade effect. The worst impact of which was that I ended up playing Mark F twice, and got eliminated. Sad!

Nevertheless, I did give him a pretty good run. Here’s a position that came up in our second match, when we were 1 each in the 3 point match. 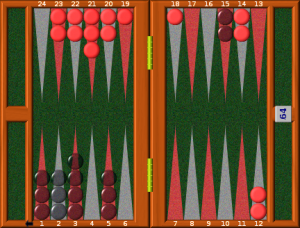 Here I’m black and Mark is red. I offered the cube. Good move? Take or a drop?

My probability of winning is about 70% according to GnuBG. If it were a 0-0 score, this would be a take. But given that the match results would depend on it, it is a pass. Mark correctly dropped, then gammoned me in the next game. Smart move, eh?

The group was a good mix of new people and returning players, with a couple of folks who hadn’t been around in quite a while – looking at you, Ed. Most people went for the side pools, and so the first place ended up being worth over $100 – $125 I think. Second went home with $60, third got their ante back. Ed took third. Newcomer Kevin and returning player Dick were in the running for 1st/2nd, but Dick made a concession to the logistics of their respective drives and conceded – they’d already played once, which was how Dick had got started in the consolation bracket. ANYWAY, Dick and Tim had a drive back to Astoria, and Kevin and Sharon had a drive back to Coos Bay (!!!!), and it was 7:30 and my wife was texting to ask if I’d died in a car wreck on the way home. So, that was that.

In spite of the anticlimax of the ending, it was a heck of a day of backgammon. Hope you’ll make it back next month, when I promise to do something different to make it run more quicker.

Here’s the ratings going into/out of tonight. See you next month!