I spent last weekend at the ABT tournament in San Antonio. I feel like I played well, but I definitely didn’t do well – made back about $5 on chouettes though, so there’s that. But one thing I did achieve was I took more photos of positions and took better notes than I’ve done in prior tournaments. I got it down to where I was pretty consistent about recording the match score, what I was doing, and what I decided to go with. This gives me a load of material to examine my blunders of the weekend! 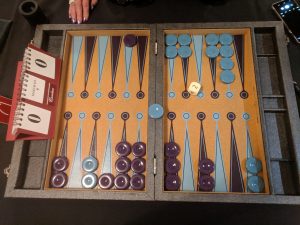 This is from Friday night, my first draw was Candace, who is the producer of the LA tournaments. We had an excellent match overall, and a long one – went almost 2 1/2 hours! Anyway – this is game 1, and my first cube of the tournament. I had gone in with the mantra of “don’t be greedy” – trying to break my habit of going for a gammon and instead losing by one. This seemed like a perfect example. But no, the double is a 0.113 blunder! I’m too good, at 85% wins/28% gammons. She correctly dropped, and I congratulated myself on a strong start to the event.

Of course, I didn’t only make blunders with cube decisions. I occasionally blew a checker play as well, as in this example: 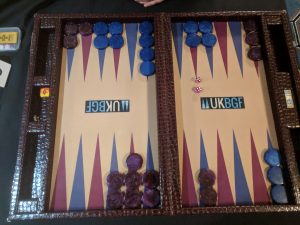 That was not, incidentally, my only blunder off a double against a British opponent. The next morning, in my first match of the last chance, against Steve, I rolled double fours in the following position: 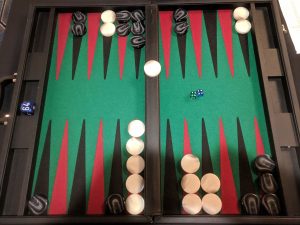 Not every play I made was wrong, however. For example, in this position, I’m playing Peggy (who, it happens, had knocked me out of the last chance in Vegas in 2017), and I’m up 3-0 in the 5 point match. 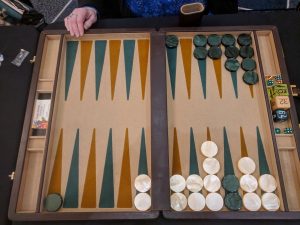 Clearly, I’m a monster favorite, the question is, am I too good to double? I spent a good amount of time thinking about it, recounted at least once, and ultimately decided to play on. Barely correct, but correct! No double is the +1.016 equity play, meaning I’m accurate within 1.6%. Super sharp decision maker!

Or not. My next match, I had an early blitz position to play, double 5’s put Roman on the bar, and he danced, leaving us here: 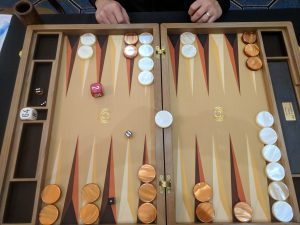 I doubled, he dropped. It was too good, +1.026, I should have played on. But – this was my main learning moment for the weekend. In two prior matches, I had been the one on the bar in the comparable position, and had taken both times, and had been gammoned for 4. So, I had reason to believe that someone might take this one, and as Phil Simborg says, your opponent can’t make a cube error if you don’t offer it.

All in all, I had a good time, played probably better than I did in Vegas last fall, and I can’t say I have regrets. I’m going to aim for two more ABT events this year – if you haven’t played in one before, it’s a good way to get a lot of time over the board with a wide variety of opponents. Away from the boards, everyone is very friendly and fun. Over the boards, of course, even more so.