We had another fine showing of 16 players for this month’s tournaments – not bad given the sunny skies and unseasonably warm weather. It was mostly the usual cast of characters, with a couple of new people (Jesse and Margaret),and Kyle’s “+1”, Bob. Bob was highly entertained to be called Kyle’s “+1”, by the way. “I’ve been called a lot worse,” he quiped.

I brought along Martin’s board to play on this time, it was nice to put it back in action. If you didn’t notice it during the tournament, there’s a couple of pictures below from some positions that stumped me (I played them both incorrectly!) – don’t forget to register for the Martin Memorial tournament if you want a chance to win the board!

I split the group into two brackets. As we were getting settled, Joel surprised me by asking for everyone’s attention, and he said some very kind words thanking me for organizing the event and keeping the group running. I want to reiterate, if there was any doubt, it’s a labor of love – I might not be the best player in town, but I’m probably the biggest maniac for the game! Joel went on to throw some money at me to help offset the cost of running the group, and encouraged everyone else to do the same – and many of you did! I was overwhelmed and touched by the generosity of the group. With the donations offered and the rake off the brackets, the group is down to a deficit of $247.95, almost down to where we were pre-pandemic. At least, until the next meetup fees come due in mid December… Ah well! The rake is catching up on the fees, and most of the entry fees from the  Martin Memorial tournament (did I mention that’s coming up?) will go to paying it down as well. I expect to get “caught up” in the next year or two – not a problem in the meantime. But it means a lot to me that people see the value of the group – it really is the community of players that makes the events so much fun!

Anyway, on to results! In the “A” bracket, Tim took round 1 over Max, Bodger beat out Kyle, Carlos (very quickly) defeated Killion, and I showed my thanks to Joel by beating him. A few rounds later, Bodger and I faced off in the final, which wasn’t even close – Bodger wiped the floor with me. In the consolation bracket, Carlos took the other second place over Tim.

In the “B” bracket, Jesse beat out Richard in round 1, Julie defeated Stephanie (a match punctuated by a chorus of “Oh my god!” from them both as Julie got a magical double 5 in the last game), Nathan got past Nitan, and Bob got past Margaret. Bob and Nathan went on to face off in the championship match, which Nathan took. Margaret and Jesse fought their ways to the final of the consolation bracket, which Jesse managed to win.

My match against Bodger had me face a couple of plays that I found challenging. Here’s the first: 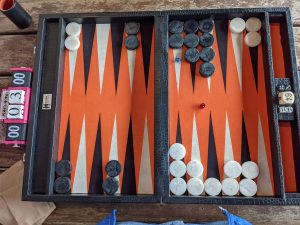 Here I’m white, bearing off towards the bottom right. It’s a little hard to see the dice in the picture, but I have a double 2 to play. My trouble lay in the fact that I really wanted to use one of them to play 6/4, but I couldn’t see a way to do that without also playing 24/22, and then what would the other two moves be? I finally settled on 24/22 (2), 3/1 (2), which is a blunder. The correct move, per roll-out, is 24/22 (2), 13/11 (2). I was thinking that keeping the mid-point was long term better as a landing spot once I pull a checker out of Bodger’s home board, but by the time I do that, I am probably aiming for a blot anyway, so getting more material to my own home board is a higher priority.

The other position that threw me came in our second game. Here I had taken a cube and then immediately thrown it back, so this was both the second and the final game for the match… 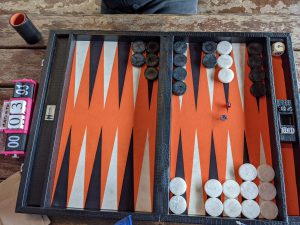 I went with “do something else”, the very cool looking, but also very wrong 22/16, 22/20. My thought is, the only way I win is to get a shot and hit it, so diversifying my back checkers will give me more opportunities to get that hit. That probably would work out if I knew that Bodger was about to roll double 6’s, but I did not know that, and in fact he didn’t. Well, it was only a -0.041 error, per roll-out, so I’ve certainly done worse.

There was a good amount of hanging around and playing post tournament, and we managed to wrap up the formal event by about 3:00, so I think this was a success. Thanks again to everyone who came out, and congrats to Bodger (second month in a row to win a bracket!) and Nathan (first time to win a bracket!)

See you all next time!