We had another full 8-person bracket today, albeit with some last minute twists and turns. We had 10 people sign up, but then one backed out, then another, then a third, then one new person show up at the last minute. As a director, that’s a whirlwind of emotions… Anyway, we ended up at 8, with 3 first timers and 5 returning players.

In the first match, I played Larry, who is one of the newcomers, although he’s also an old timer. We talked about some of the people we’ve played in common, but none apparently in the same decade. Hopefully that will change soon… I had good luck, and won, in spite of him significantly outplaying me.

This position came up in one of our games, and is one of many, many examples I could have picked of checker play blunders. On the bar, rolling a 6-2 is a great piece of luck. Obviously the 2 is B/23*, but I went fast with the 6 and played a blunder as a result. 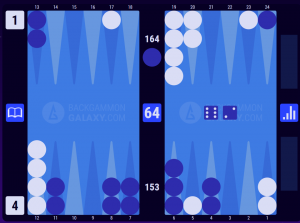 23/17* just looked obvious from a get-more-pips lead and momentum perspective, but it is worse than 11/5* by -0.083! In retrospect, the potential prime built by slotting the 5 seems kind of obvious, but I played the move in about 2 seconds and didn’t even think of alternatives.

Here’s another position I misplayed, file under “doubles are hard!”: 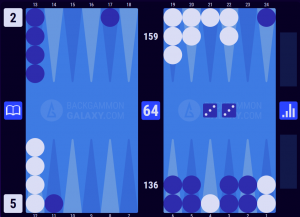 Similar theme to the last one. 24/21* pops up immediately, but what to do with the other 3 moves? Well, what do I really want here: a gammon. The best way to get that is to keep Larry on my ace point, and use the other 3 moves to play 13/4*. Completely failed to even consider it – instead I let momentum take me 21/18, then looked around for 2 more to play, eventually settling on 17/11. Which looks kind of pretty, accomplished nothing much, and lost me -0.134 in equity!

I didn’t only blow it through bad checker moves though – I also made plenty of cube errors. Here’s a fun one. I’m on the bar, holding the cube, closed board, and a blot to aim at. What’s the cube action? 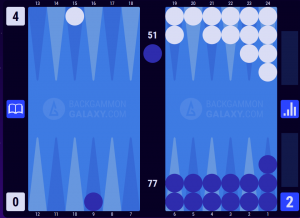 Jesse went on to beat me 7-0 in the match, then faced off against Tim (Tim E, not Tim D) in the final. I watched the match online, and it was a good one. Here are a couple of other cube decisions that came up, which surprised me as they were playing.

First off, in the first game, Jesse (white here) is on roll, and offered a cube. Would you have done the same? 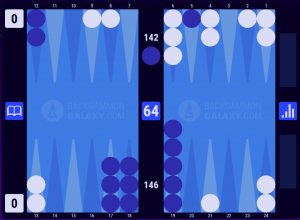 It’s a surprisingly close one. He’s up slightly in the race, but his position isn’t great, with 3 checkers back. But he does have the threat of pointing on the checker on his 5 point, or doing a pick-and-pass. Tim snatched up the cube of course, as it is a narrow no double position: -0.011 error to double here. But I did not recognize how strong Jesse’s position was. Only 59% to win, but 33% to gammon, makes this nearly a double, and probably worth time to think about the take.

Finally, here’s a position where Tim offered the cube. I assume his thinking was that with an even race, it is likely to be a take. But it’s a clear too good situation! 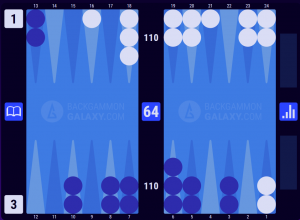 Position, race, and threat. Normal rule of thumb is if you have 2 of the 3, it’s a double/take. Here all Tim has is position, but he has a lot of it! Jesse lacks the timing to keep a strong home board for the eventually return shot, and Tim doesn’t have a lot of gammons, but he’s 88% to win, so there’s no harm in playing on. Well, it worked out for him, as Tim went on to win the match and thus, the tournament. Congratulate him the next time you see him!