I’m in Geneva this week, visiting my daughter over the Christmas holidays. Naturally, given that there was an opportunity, I found a way to go play some backgammon!

The Geneva Backgammon Association  meets at a local bridge clubhouse. As usual, there was a lot more smoking going on than I’m used to, but it was a friendly and active group. The tournament was supposed to start about 7:30, but when I showed up there was a lot of chouette going on, and things didn’t transition to the tournament until closer to 8:00. They have a more structured approach to the club than I have, with membership dues and so forth. But they let a non-member play for just a slightly higher entry fee. The tournament itself was a standard bracket + consolation, but not progressive consolation, so you were only guaranteed two matches. They play 7 point matches.

My first match was against Guillaume (or William), which drew me a lot of sympathy from the locals. We had an excellent and exciting match, including a couple of interesting positions – possibly a third if he actually hunts me down and sends me the photo. The first is a double that came up early in the match – sorry for the slightly blurry photo: 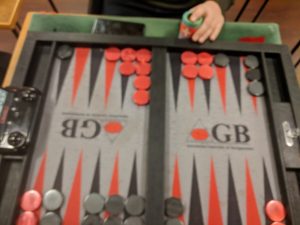 The score is either 1-1 or 2-1, something pretty low anyway, where it doesn’t really come into the decision. I’m in pretty good shape, but with one checker still back and another sitting in the outfield, there’s a fair amount of work left. I wasn’t 100% sure this was a take, though, and so offered the cube on Woolsey’s law. Guillaume wasn’t sure either. After a minute or so of thought, he dropped, which XG confirmed. It’s 71.6% to win, but 24.9% gammons, and so actually a small blunder to not double. The take would have been a huge blunder, though.

The second came in our last game. I didn’t take a photo, but he did, and confirmed I got it set correctly in XG. 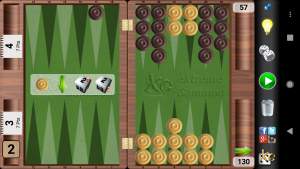 I’m down 4-3 and holding the cube. At this roll, I have 20 numbers that hit. If I don’t hit, I’m in pretty bad shape. If I do hit, I’m probably the favorite. I doubled. Guillaume thought fairly hard about it for a while, before correctly coming up with a take. But initially he was confused why I was even doubling. In money play this is a no double, and pretty much it’s only a double because of the match score. If we had been playing to 9, this is again a no double. If we were tied at 3, it’s a no double. But when the alternative is losing into the Crawford game, well, how much more desperate do you need to get?

I didn’t hit him though – rolled a 2-1 and slotted the ace point. He, in turn, rolled a 4-5 and stacked up a bit further. Then I hit him. The rest of the game got crazy – multiple hits on both sides during the bear-off, but in the end I got lucky and won.

My second match was against either Phillipe or Ola, depending on who won their match (Ola had gotten a bye on round 1), so I had a good long wait. I could blame the jet-lag, or I could blame the dice, or I could be a good sport and admit that Ola outplayed me. I took a lot of cubes that were pretty clear takes, but having a clear take doesn’t make you the favorite.

Anyway – after all that, I had tied for the side pool, sadly I have lost the name of the other guy, so we split that, but played a single game for the 5F that wasn’t otherwise easy to split. It was another crazy game – I blitzed him early, got hit in the bear-off, got hit coming back around, hit him coming back around, and generally we had an uproarious time.

So if you’re ever in Geneva, look them up – the group is relatively small but also quite active. They encouraged me to come back for what are apparently every afternoon chouettes, but I probably won’t get the chance – after all I am here first and foremost to see my kid. But it’s fun to get out and play a little too.

We had a decent showing for our final meetup of 2018 – 8 players. We played a Swiss format, which should have meant 3 games each, but somehow my matches kept running long and so some people got tired of waiting for their third pairing.

In my first match, Julie got me down 4-2, but I survived the Crawford game to get it up to 4-3, doubled early, and squeaked out a win to come back. My next match was against newcomer Phillip, who gave me a decent run as well. Nate was waiting patiently that entire match to play the winner, but had obviously gone cold from the delay, because I managed to win.

Second place was a tie between Nate and Martin, who both had two matches and 13 games won. Martin likewise had grown tired of hanging around, so I’ll owe him $10 the next time I see him. January we’ll pick back up with a “second Sunday” schedule, I expect. See you then!