So, COVID-19 has kept us all from getting together to drink and gamble in person. The Portland Backgammon Club continues on, though – virtually.

Today we had our first online tournament. 8 players showed up to compete. We did it as a single elimination, because I did not want to juggle the logistics of something more complicated. It was a learning experience.

I’ve played in a few online tournaments in the past months, mostly those sponsored by the US Backgammon Club, as well as played some with local members looking for an online game. Most of my activity has been on backgammongalaxy, which allows you to play via your web browser, and so my chromebook is adequate for the task. It also gives you an analysis of your match immediately afterwards, using XG, making it a very effective learning tool as well if you have the patience to look through your blunders while they’re still fresh on your mind.

The other tournaments I have been in have used whatsapp or discord for communication, and some have used a bracket management site called challonge. For our first Portland backgammon tournament, I just set up a group text message to communicate with everyone. The limit of that is Tim E, who is a caveman and still uses a flip phone.

Anyway – first round there was some technical confusion by having both Tim E and Tim D show up to play, something that hasn’t happened in years actually. Michael was supposed to call Tim E, but called Tim D, and before Bryan did. Bryan eventually figured out what happened and asked if he could just play Tim E instead, and we went with that. Paul is still on our mailing list, and he got paired with Steve. I played Bob. We played 5 point matches for the first couple of rounds, and a 7 point final.

In the first round match, I made a blunder on the following position, which is similar to a host of positions that I seem to not be able to get through my head. I’m on the bar, and so have to come in with the 1; but what should I do with the 2? 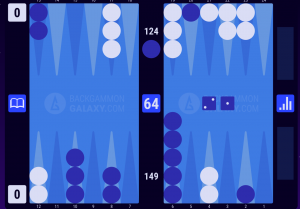 But, in this case, a -0.101 blunder, just as bad as playing 8/6. Why? I do not know. That’s what I’m saying about this kind of position confusing me. Maybe because I’m so far down in the race, I want the extra couple of places of contact? I’m really not sure.

A few rolls later, I was on the bar again, and had another decision to make. 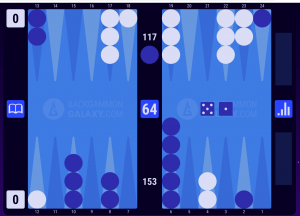 The correct play is bar/24, 10/5. Why? Again, I don’t know. If I understood the position, maybe I wouldn’t have played it wrong.

First games are rough. Eventually Bob took pity on me and offered the cube so I could drop. He did that again the next game as well, but I rallied after that, managing to come back to win.

In the second match, I faced off against Paul. He and Steve had played a protracted first round match, and by the time they were done, Bryan and Michael had already finished their second round match. But Paul and I made up time with a pretty quick match (which also gave Bryan time to get lunch), so no harm done. In our second game, Paul offered me the following cube: 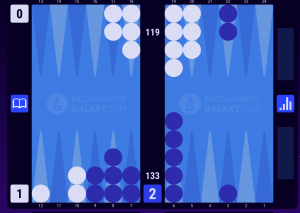 Should I take or drop? I’ve got 2 checkers back on his 3 point, with a clear shot at freedom, but I am down in the race, his prime can get better on the next roll, I have no home board, and I’m up in the match. I did not fully figure the odds of my coming back to win the game, but it seemed like a pretty clear pass. Nope! Dropping is a -0.095 error! I’m still 22.6% to win the game, according to XG. Apparently that ability to escape with a 6 is worth more than I figured. That evened up the match score. Paul won a doubled game on the next one, then offered me the cube again in game 4, which I accepted and redoubled to make for the match. Then I snuck out a win with a miracle 6-1 roll when I needed it most.

Mind you, these are not all the blunders I made through the day. I was not playing that well, in spite of getting the wins. They are just a few of the ones that stand out. But my biggest blunder of the day came in game 4 against Bryan in the finals. I am up 2-1 and think I have a difficult decision to hand him with this double. What would you do? 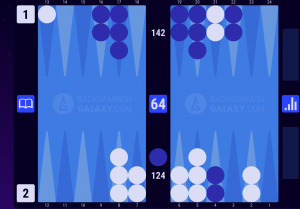 Bryan took, and was eventually able to return the cube to me, which I had to drop. This is a big no-double, -0.24 mega-blunder to have offered it! Sure, I’m the favorite here – ahead in the race, he might dance, giving me an opportunity to escape the back checkers or make more points on my board. But, and this is important, he might not dance. And if he comes in, he’s not in such bad shape. I’m only 59.3% to win here, way below an efficient cube level. I had a great roll, filling the 3 point, but Bryan came in with a 4-2 and was able to turn it around on me.

For that game, anyway. I held on to win the match, although it was a tough one!

Next time, I might explore using discord, or challonge, or otherwise up the technological requirements to participate. But everyone seemed to have a good time, it was great to get to interact with others, and we will definitely do it again soon.