We had an excellent turnout for today’s tournament – 14 players! There were actually 3 other people who showed up late, but never more than one at a time… First guy, I said “sorry, we’re all paired up, don’t think you’ll get to play in.”, and he said “no problem, maybe next time”, and left. Not 5 minutes later, a second guy showed up. I said “crud, you just missed a guy, maybe he’s still here…” but he wasn’t. Second guy gave me his cell number and said “text me if he comes back.” About 20 minutes later, third guy shows up… I text the second guy, who doesn’t see the text until hours later. So moral of the story: be on time! Of course, we had three people show up while I was setting the first pairings, so it was a close thing…

We tried a “Swiss Format” this time, and I think it worked very well! I used dice to randomize people into 7 pairs, plus a bit of “yeah, uh, play that guy who just walked in”. But once the pairs were set, I don’t think anyone had to wait involuntarily more than about 5 minutes for their next match (although a couple of breaks were longer than that for nicotine or food…)

My first match was against Tim E., who has a grudge against my new board. It’s a beauty – a tournament sized Crisloid that my wife got me for my birthday this year. So far I’ve been very lucky on it, especially against Tim. Here’s one position that came up in our first game: 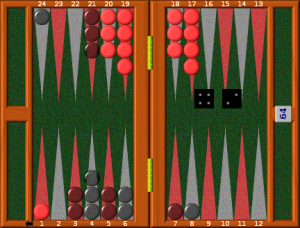 Here I’m black, and just rolled a 4-2. There were two options I was considering. First, 7/1*; second 8/6, 7/3. According to both GnuBG and XG, these are the right two options to consider, but it’s not especially close. It took me a minute or two over the board, though. 7/1* has about 39.4% wins, about 8% gammons; the more passive but safer looking 8/6, 7/3 is a blunder (-0.092 according to GnuBG, -0.137 according to XG). As usual, it doesn’t look that big of a difference to me. But I guess the difference comes not with red’s next roll, but black’s roll after that. With 4 men back, I’m in trouble on the next roll if red re-enters, or hits. As it happened, Tim danced, and I was able to pull this one off.

After Tim, I had a final match with Lee, who is moving back to Vegas this month. He’s been a fun addition to the group, but says he’ll be back for visits from time to time, and of course we can look for him when in Vegas (although we won’t be able to talk about it…) I gave him one of my bar boards as a parting gift.

I then made the tactical mistake of agreeing to play Martin on his own board, and got crushed. I wish I had taken a picture of the position that cost me most of the match – I had a choice of hitting loose on my home board (leaving two blots) or covering a blot on Martin’s home board, and went with the chicken move, which was probably wrong by a lot.

By a bit before 4, Jarom and Martin were the only two undefeated players, and so they played for the championship. It was a good match, and Martin got the top spot for today, winning the final game with some very timely double 4’s.

I’ll be posting a summer schedule soon – my thought is to do a “tour of patios” series, hitting two or three places we can play in the sun over the summer. Stay tuned for that!