We had a great turnout for a rainy day afternoon of backgammon – 14 players! Two and a half new folks – Jeremy had come to the last chouette where he did quite well, thank you very much. But Judy and Dave (Naomi’s partner) were complete first timers. We saw a couple of people who haven’t been around in a while, like Julie and Michael. And the most regular of the regular all seemed to make it as well.

First place went to Tim, for the second month in a row! After a rough start to the year, he’s just turned into a juggernaut. He crushed newcomer Dave 5-0, then Bryan got the same treatment. Then Chris did too! I was less than thrilled to get him in the final. But I taught him to not be cocky, handing him 2 whole losses in the match. Notable moments included him being forced to leave me a double shot during his bear-off, which I managed to miss. No photos were taken, however, so nothing to show off.

Here’s the updated top player list for the year. Tim is winning on consistency and rising in win/loss record, but Steve has a pretty solid lock on win/loss through his first few months.

I had the pleasure of attending the Viking Classic tournament this weekend, in Minneapolis. I’ve been wanting to go for a couple of years – April was very helpful when I was prepping the Portlandia – and it was a great time. I have a few positions worth recording from the event, to boot. And Bryan, who also attended, ended up placing in the consolation bracket.

This first position is from my first ever match with Neil Kazaross. Yes, I had him as my draw in the first match of the weekend. Not an auspicious start! This cube was in our first game, I’m red, bearing off to the left: 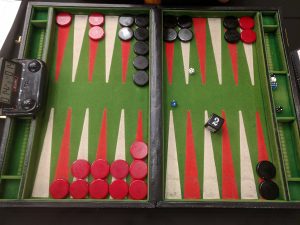 I put the thought in. Clearly my problem is that I have three checkers trapped behind his four-prime. But, his position is pretty stacked, he’s going to have a hard time extending it, and I have time in the two checkers on the midpoint. I took. Only a 0.025 error! If my anchor was on his four point instead (as it was after the 3-1 I rolled on my next turn), it would be a take. Anyway, Neil beat me, then beat me by a doubled gammon in the next game, then I survived the Crawford, but lost the next on the race.

This next one is from a much more even match, versus Dave, in the Warrior Jackpot. I had built a comfortable lead, this was part of Dave’s turnaround (he beat me…) Also, by the way, you can see my prototype scoreboard in action. 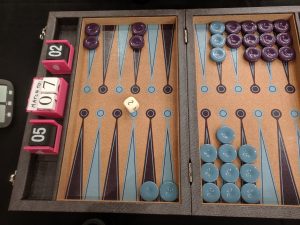 Here was my thinking. I’m up in the match, all single games so far, he’s likely to leave a shot bearing in, I can probably force a hit, and if I win it’s for the match. I took. Now, in a money game, this is about a -0.05 error. For the match score, it’s a -0.297 blunder to take! Greed is a killer! He did leave a blot on his next roll, I did hit it, and was suddenly a massive favorite in the match! Then he rolled a 3-4, came in, hit me, cleaned up the other two blots along the way while I danced, and won a gammon. Sigh. 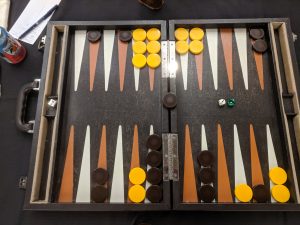 The dilemma in my mind was, should I hit? 13/10*, B/23 would give me an anchor, albeit one that doesn’t escape. It would also leave me three blots in the outfield with direct shots, and so I ultimately rejected it for the correct play, B/22, 23/21. I’m a massive underdog still, but not completely out.

This next one is from later in the same match, I’m down 5-4 in match score, and was offered a cube: 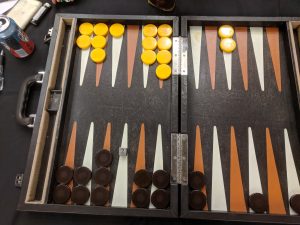 Finally, a puzzle of a position based on match score. Here I’m playing Christina, who is leading in a 7 point match and who offered me the cube. Now, the puzzle is, was this from our next to last game, where she’s leading 3-2? Or from our last game, where she’s leading 5-2? I can’t remember, and I didn’t note the score in the picture. So I have no idea if I got this one right! 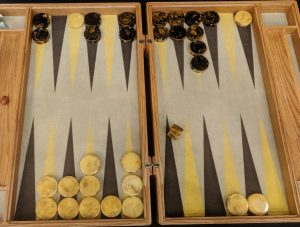 For money, this is a clear take. The race is pretty even, at 101-98, she’s slightly ahead but not enough to matter. I have plenty of checkers to finish my home board, and might escape to run, or even hit a blot. If I’m down 3-2, the match score means that her gammons are a much bigger threat, and I should drop. And if I’m down 5-2, her gammons are not worth anything, and she shouldn’t be doubling because I will immediately recube!

So that was my weekend. I had a great time, the people were incredibly nice, and I think I played pretty well in spite of not winning so many matches. Minneapolis is great backgammon town, turns out, and I hope to be back next year.