We had a modest but sufficient turnout for the last-minute-rescheduled chouette. I owe an apology to Tim and James, who both showed up on the original date, although not at the same time, leading to a distinctly unsatisfactory situation for each of them. I shouldn’t have let my work life get in the way of backgammon – at the LA tournament this past weekend, I saw a t-shirt that read “Quit your job & play backgammon” – solid advice to be sure.

There were a number of interesting positions that came up over the afternoon. This first one is a checker play decision. In running some of my matches through XG, it’s clear that playing doubles is a “problem spot” – the excess of options sometimes leads to me having trouble… 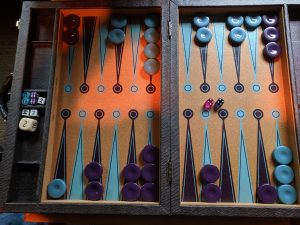 The best play is 24/16(2). However, that’s such a good move that I’m still a favorite after this enormous blunder! The rest of the game was interesting. Mark F entered with a 2,3 or something that left him with a blot on the 5 point – I didn’t take a picture so maybe one of the back checkers is off: something like this:

At this point, it’s clear why it was a mistake to leave the back checkers alone – I don’t even have a double! But then I rolled a 6,1 played 11/5*, 6/5. At which point, Mark F fanned, and it was a double/pass. So, all’s well that ends well? Or more likely, even a fool gets lucky sometimes.

Clearly, a fool does get lucky sometimes, as in the following position:

Here, red has been forced to leave a double shot by an unfortunate 5,6 roll. The question is, does that leave white too good to double? I ultimately decided that no, it’s “only” 20 shots that turn it around, so it’s a double. And it’s also a drop for red.

All in all, it was a lot of fun, and I promise to schedule only one time for the chouette for June. The tournament, on the other hand, I also screwed up, and originally sent for the 9th, when I was in LA for the ABT tournament. Apparently about 3 people showed up for that, although I moved it on meetup within a half-hour… Sigh…