I attended the Las Vegas Open last month, for the third time, and am finally getting around to looking through the photos I took of various positions that came up – mostly around cubing decisions. Here are a few that were interesting.

This first one is a screenshot of XG Mobile that I created after the fact. Spoiler alert, I went on to lose the game, and later the match. Here black is on roll and offered me the cube: 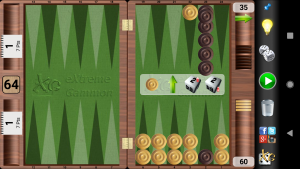 My thinking was, 16 rolls leave him stuck on my 2 point, and of the rolls that escape, I have a shot at hitting him again. And indeed, it is pretty close! It was only a -0.029 error to take. White has 22% winning chances, and of course there are no gammons. One more checker for him on his 2 point, and it would be a take. As it happened, I think he rolled double 6’s, which did not leave me the hoped for shot.

This next one is from a blitz against Ed O’Laughlin, who I had the opportunity to play a couple of times, and you can consider this name check as foreshadowing. I had doubled him earlier in the game, and he decided to return the favor: 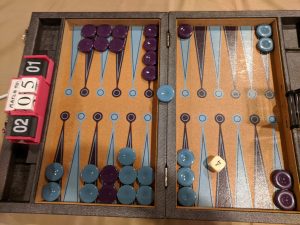 I’m ahead in the race, 107 to 117. I’m on the bar, but there are no other threats. And he’s got a little bit of a struggle to actually close me out. Position-Race-Threat – I figured he had 2 out of 3, and took. Again, very close! -0.038 error to take, and if his checker on his 7 was on his 8, it would be a take. In fact, I think this was probably a take, considering the difference in skill level between us – I’m a much weaker player and dragging the match out has to work in his favor. Fortunately for me, he did in fact have trouble closing me out, I came in and ultimately won the game (and hence the match).

This next one is from the first round of the main tournament. I was playing Keiken, and she offered me this cube in our third game: 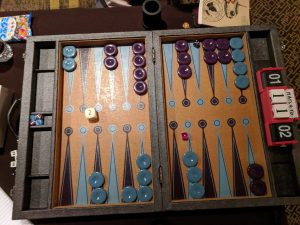 The picture is a little dark, because we were playing in the “overflow” table out in the hallway. Position-Race-Threat. She’s got position – both her back checkers are escaped, and she’s a strong favorite to make either her 5 point or her bar point on the next roll. Race, I’m way behind. Threat – well, not much, except the threat that she’ll make a prime before I get my back checkers split. I dropped, correctly. It’s actually a -0.283 to take! More interesting is how this is as a double – it’s only -0.021 to roll here, and if my back checkers were split, it’s completely even whether or not to double.

And having a picture from my first match of the main, here’s one from my last – this is the match that knocked me out of the Last Chance. 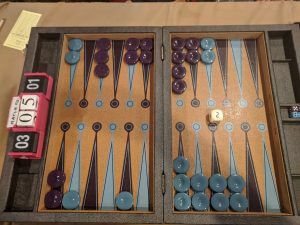 I’m up in the match score, and so should be worried about gammons, but there’s not much gammon potential here with my advanced anchor. I’m down 129-120 in the race, weaker in position, but no real threats to speak of. I took the cube. In fact, it’s a small no double for black! -0.007 error on his part, which is to say, not really an error. He pulled off the win, and then the win in the next game as well.

Which left me with just the blitz to play in. I entered 6 blitzes in total, and won 1 of them. For the blitz playoffs Saturday night, I had a play-in round against Gus, who had won 2 entries, and who I had beat for the 1 blitz that got me into the championship. I then had a second round match against David, who I had beat in 2 of the blitzes, and again in the championship! David was nice enough to send me the transcripts of our matches, and it was clearly luck rather than skill that got me those victories. The evening dragged on, as I waited for the match to determine who would make it into the finals, which ended up being me against Gus again! We played until about 1:00 am, and I squeaked out the win.

I made it to the blitz championship, facing off again against Ed O’Laughlin! This was very exciting for me, as it’s the first ABT event where I made it onto the results page. I didn’t figure I had good chances to win, in spite of having beat him before, especially as tired as I was by this point. The match came down to the following position, which I again did not photograph, but took a screenshot of the XG analysis right after: 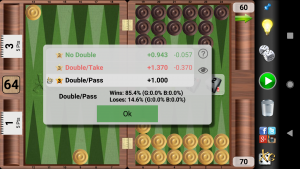 As you see from the XG analysis, it’s a huge -0.37 blunder to take. But take I did, and re-shipped the cube on my next roll. No regrets, and here’s why. Also you see in the XG analysis, I’m 14.6% to win from this position. At 4-away/1-away Crawford game, my match winning chances are more like 18.6%, depending on which Match Equity Table you use. But here’s the thing: those tables work on the assumption that the players are evenly matched! I am a much weaker player than Ed. Over the board, my reasoning was, I’m maybe 40% to win. I would have to win the Crawford game, and then about twice more. 0.4^3 = 6.4%. I’m much better off taking my chances with the race. There’s probably some flaw in my thinking there, but I think it’s worth spending some time working on Match Equity Tables with uneven chances to figure it out. And, maybe, I will.

Anyway, I lost the race and the match, and so placed 2nd in the Blitz Championship. Like I said, still a big deal for me. I have a long way to go, but made me feel like I’m on the right track.

We had a great showing to finish out the year – 16 players, including 7 (seven!) first timers. 16 makes a perfect bracket, so it was easier than usual to keep play moving – occasional pauses of course and some play faster than others, but when one pair finished a match, I could usually say “go wait for that other match to finish”.

First timer Rick should have taken the prize for the furthest traveled to come play, driving up from North Bend; but Sharon made an appearance (after about a year absence) from Medford. And of course, Max brought his parents, who were visiting from Philadelphia. So this was about the farthest flung group of players we’ve ever had.

Here’s the final record for 2019 matches. I’m thinking I should create some kind of top participation prize for Tim and top score prize for a player with 20+ matches for Nate. Maybe some ribbons or something.

I’ll get the 2020 tournaments onto the calendar soon – first few months will be on a consistent schedule. See you then!