Yesterday, I took part in the 9th annual Bellingham Winter Classic. It was my first time up there – I had been invited a couple of years ago but the timing didn’t work out that time, and it was a great little event. 16 players showed up for the “A” flight, and I believe another 8 for the “B” flight.

Tim also made the trek up from Portland, and we joined 4 players from Bellingham, 8 from Seattle, and 2 from Vancouver BC. Neither Tim nor I made it especially far in the main event, but we then did a fun little round-robin with Chris and Kristi. It made for a full day of backgammon, and I was able to get back down to sleep in my own bed last night, after a pleasant stop in Seattle to spend a little time with my daughter.

Michael, our host and organizer, has some big ideas. One thing he would like to do is have a regional event, pitting Vancouver BC, Seattle, Bellingham, and Portland against one another. The idea is that each place sends four players to the match, and the best overall team result wins the day, and then hosts the next year. I’m always up for another event, so we will see if we can pull that off.

Here’s a position that came up in my second match of the main event, against Kristi. Just a few rolls into the game, I’m on the bar, and was offered the cube. Should I take? 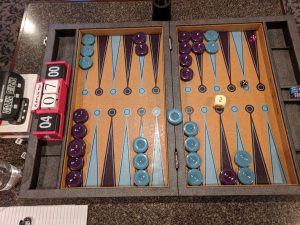 I like this one, because the match score comes into play. This would be a blunder to pass for money, or if it was the first game of the match. But it’s a borderline double at this score – XG mobile says it was -0.003 for her to offer the cube at this point. But human psychology wise, definitely the right move. It gave me pause. I did take, and she went on to win by a gammon.

Overall for the main event: I got crushed in my first match against Karl, losing 9-1. He pointed out one position where I made a clear blunder, but it was also a match where I just couldn’t get any breaks and he rolled a lot of big doubles when he needed them. Ah well. I did win my match against Kristi, although it was quite close. And then I lost my match against Joe, although again it was quite close. Both of those last two came down to the winner getting one more double in the bear-off than the loser.

All in all, a good time – I look forward to returning next year.

We had a good chou this month, trying out a new location. We went to the Kenton Club, which… is dark. They were very nice, the drink pours were extremely generous, and the jukebox was great – playing a nice mix of classic rock and rockabilly. But it took a while for our eyes to adjust to the dimness. We were playing at the best lit table in the place, and Judge Judy was playing (no sound) on the TV just to one side of us – whenever a commercial came on that had a white screen with a page of disclaimers for whatever side effects came with their drug, someone would invariably remark about how it was suddenly much brighter.

All of which is to say that, although I do not regret choosing the location, we probably won’t be rushing back there. There’s another spot a couple of blocks from there which Martin recommended, and so we’ll maybe give it a shot for the next chouette. It might even be big enough for a tournament, but we’ll start small.

Five players were in attendance. Jeremy made the trek up from Salem again, Martin, Tim, Bryan, and me. Tim had the longest and most successful run in the box for the day, at one point ending up over 30 points, although he slid from there before the day was over. I had to head off “early” (at 5:00), and so I don’t know the final positions for everyone, but it was a fun afternoon.

Here’s a position that came up in one of the games. I’m facing off against Tim, who has already taken the cube, and I rolled a 4-1. Prime versus prime type of position developing. The big question in my mind: should I split my back men?

Here’s my argument against splitting: It gives him 9 numbers that turn this into a blitz, and it’s also important for me to move the checker on the mid-point to a safer location. Here’s XG’s argument for splitting: everything else is a double-blunder at least. I went with the second best move (-0.173 equity loss), and Tim went on to win the game. Ah well.

We had a great turnout for our first tournament of 2020 – 18 players! There were a couple of brand new people, maybe three if you count Kate who showed up to watch last month but played for the first time this month. And there were a few last minute cancellations as well, plus some regulars who were not available… I am thinking we’re going to break the 20 player threshold in the next few months.

I’m thinking about making some structural changes to deal with the larger turnouts. Rather than run things as one big (and confusing) Swiss-style event, I might break the group up into several double-elimination brackets, which would mean payouts to more players, but lower payouts. It would also mean I need to spend a lot less brain-power on keeping people paired up properly, as those pairings would all be set at the initial draw. Keeping the pairings straight is a challenge with 12+ players. For instance, this month, at one point I had to pair Jeremy (who had 3 wins/no losses at that point) with Brad (who had 2 wins/no losses) because they were the only two undefeated players left. Not such a big deal, if Brad had won; because at the time I was playing Tim and we both had 2/0 records. If Brad had won, then I would have played him, and the winner would have needed 4 wins to win the tournament, which is perfect for an over-16 person bracket.

But sadly, Jeremy won his match against Brad, meaning that he was going to need 5 wins to win the tournament. Sort of unfair, since his opponent only needed 4 wins. We dealt with that by agreeing to a double-win criteria for his opponent – that is, if Jeremy won the first match he won 1st, if he lost then his opponent would have to win a second match to win 1st, since at that point they would be “tied” with 4 wins each.

That opponent, by the way, was me. I had a pretty dramatic match with Tim. I won the first game, he won the second. In the third game, he doubled me fairly early, and I was able to turn it around to where I could re-cube him. I should have taken a picture at that point, because it seemed like a close decision. Tim decided to drop. In the fourth game, I was able to hit and cover my home board on about roll three, and turn that into a successful blitz, winning by a gammon.

Anyway, that’s how I ended up in a position to eventually take second place.

In our first match, Jeremy and I had some good back and forth, I eventually took it 5-3. In the second match, I was not as lucky, and ended up losing 5-1. So Jeremy gets the first tournament win of 2020, and is currently leading the pack in terms of (1) total matches played, (2) matches won, and (3) winning percentage.

I’m not yet sure what format it will take, but there will be some kind of awards handed out for each of those metrics for 2020. I’m taking myself out of the consideration for the total matches played, because I have a unfair advantage as the organizer – I will be at every tournament this year, and most likely I will be the only person with that distinction. Maybe not – Nate, Tim, and Chris all came close to having 100% attendance last year, and there wasn’t a ribbon at stake then.