We had a good showing this month – 10 players, including 2 newcomers, Naomi and Ali. Steve came back (all the way from Hillsboro), and a lot of the standard crew made it as well.

From a logistical standpoint, we had a great tournament, in that most of the first round finished at about the same time. This is important, because the way I dealt with the odd number of pairs was to give one second round and one third round bye, and it’s fairer to do that by random lot. Martin got the second round bye, I got the third round one. Tim didn’t get a bye, but he did win the tournament – something he claims has never happened before! Congrats Tim.

I faced Tim in the final, and he was having a good day indeed. This is the cube he offered me in our first game (match to 5): 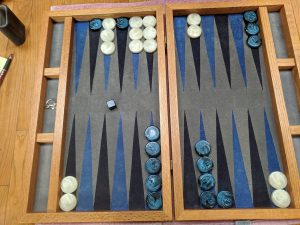 In the second game, I had an opportunity to return the favor, when I shipped him a cube at this point: 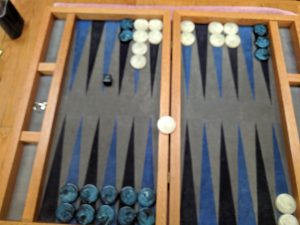 This time, I have Position and Race, although I’m only up 121-135. The threat is that he’ll dance several times, as I escape the back checkers and/or finish the blitz. But it’s a weaker Race and a weaker Threat than the cube from the first game. Does he have a take?

No, no he does not. And Tim recognized that, correctly dropping.

From there, I went on to take a 3-1 lead. Then he had the temerity to gammon me in a doubled game to win the match. Can you believe it? I could – it happens to me more often than I care to think about.

At this point, the top of the cumulative results for the year are as follows:

New comer Steve “Stevie Rae” is in a commanding lead in terms of percentage won. Tim and Nate are jockeying for most games of anyone who doesn’t control the system, thereby guaranteeing that he’ll get more playing time than anyone else in Portland.