I spent this past weekend in Minneapolis, for the annual Viking Classic backgammon tournament. This is the second year in a row attending – last year it was my first travel-to event in the pandemic era. I went in feeling like I have a much stronger game, and feeling confident that I would have my best tournament yet. And, naturally, I got slaughtered!

My first event was the “Friday Frigga”, a mixed level event, and I was lucky enough to be paired against Dana N (currently #16 in lifetime ABT points). I lost the match 0-7, but it was a pretty good match for me regardless. Consider the following position, which happened in our second game, so I was down 0-1 at the time. 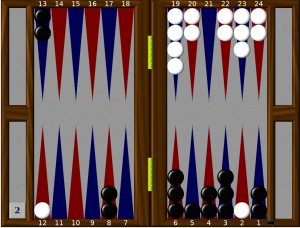 I’m black, on roll. What I noticed at first is that I have 6 cross-overs before I can begin bearing in, versus 5 for him, which meant that the pip count was probably pretty close. In fact, the pip count is dead even. His board has started to crack, with the dead checker on his 2 point. My board is a mess, but a lot of rolls clean it up. 1’s and 3’s are all amazing. So I doubled. And he had to think about it! Analysis shows that it is, in fact, a pretty big double: -0.194 equity to not double. But it is also a big take! So I was proud of myself for spotting it.

This next one is shown from my opponent’s perspective. I’m up against Franklin (who became my main nemesis for the weekend, beating me in 3 separate events). The score is 3-3 in a match to 7, and he offered me a cube. 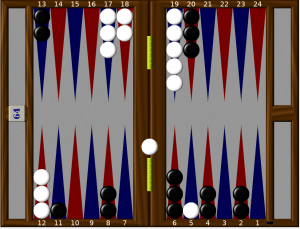 So I’m on the bar, sure, but he has 3 checkers back and not so many rolls that immediately destroy me. 4-4, 3-3, 6-3, 6-1, and 3-1 point on my blot, and then I would really regret the take. But I don’t have a lot going for me either. It dawned on me that he was positioned to win a lot more gammons than I would from this position, and thus win the match. If you just are considering wins/losses, it’s not so bad – I have a bit over 30% winning chances here. But he has about 36% gammons, while I have about 6%! So his “gammon adjusted wins”, which I just recently learned to really respect, are more like 85% than 70%, and it’s a huge drop. Which, I did drop. So, well played, and lost anyway.

I don’t mean to imply that I played flawlessly, and the dice just destroyed me match after match. It certainly felt that way, but I’m sure I made plenty of blunders to help myself into defeat. For instance, this position, which was from my next match with Franklin. 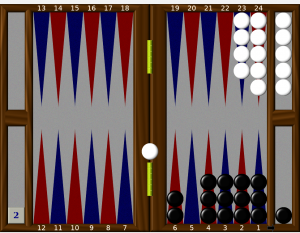 This is a pretty standard position to redouble. At 0-0, it’s a redouble/take. Unfortunately, the score was 4-0 in a match to 7, which makes it a HUGE no redouble/take & flip. I should have played on – if (as it actually happened) he immediately rolled 5-5 and won the race, no big deal, I’d be up 4-2. If he danced a time or two and I cleared the 6 point, then I’d have a redouble/drop. But as it was, it was a -0.947 deca-blunder to cube here, because he got to flip it back to me before rolling the 5-5.

In spite of my belly-aching, I did have a good time. The event is well run, the staff are all sweethearts, there are a ton of events, and I got to play a lot. I estimate I played 25-30 hours of backgammon over the 3.5 days I was there, and played respectably against a number of Open level players. I even came in second in the Valhalla event (which I had won last year, so second year in a row to cash in it). I connected more with some people I’ve met before, and met several new people who were all very nice. A couple of better rolls and I would have been bragging about how well I did. And that’s backgammon – skill is great, but luck is going to get you. I woke up Sunday morning, and thought “if I have a day where I can’t roll what I need, I’ll also have a day where I can’t miss”. That day didn’t happen at Viking, but the Denver classic is coming right up.