Backgammon teaches us to deal with uncertainty. Should I make a point, or hit loose? How can I play this 3? What was the score again?

This week’s event really stretched that dealing with uncertainty to the limit. We had a bunch of questions that were very difficult to answer. Does the place open at 3:00, or 4:00? If it opens at 4:00, where do we go instead? And who won that last bracket, anyway?

Some of those we now know the answers to, some are still out there. It did open at 3:00 (promptly), and a pretty large contingent of backgammon fanatics shuffled in, then back out onto the patio. We ended up with 17 players in the tournaments, plus Sande and a few others drifted over from the Second Sunday to hang out and play some more. So all in all, a very nice event (although significantly too hot out!)

We ended up filling 6 brackets, and in contrast with last time, the winners were pretty distributed. In bracket 1, Dave came out on top, Jesse took #2, Cameron the third, JB beat me out for the 4th, and Joel rounded it out with the final win.

If you were carefully counting, I listed 5 winners for 6 brackets. How does that work, you may be wondering? Well, the 6th bracket is not over yet! Tim and I each won in the first round, but by then I was fried and Tim kindly agreed to meet up later to play for the win in that one. Which – has not happened yet, almost a week later. The tension is palpable!

Speaking of tension, here’s a position I captured from my game with Mark A. Here I’m up 2-0 in the match, and he offered me a cube. 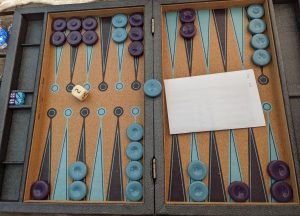 I have one checker on the bar, but also an advanced anchor made. So it’s not hopeless. I have been thinking a lot lately about cubes in match play versus cubes in money play. This is a good example – it’s a double/take for money, and I had a good sense of that. The computer says I still have about 29.5% wins, as Mark has to get his back checker out and around, and it will likely take him several moves to cover his 4 point – by which time I will probably escape and maybe hit him back. However, given that it’s a match rather than money, and especially given that I am up in the score – it is a pass. At an even score (0-0), it would be very marginal, but here it was a sizable 13% blunder to take. Fortunately for me, I did not take, but it was the start of Mark’s comeback. Final score in the match was 5-4, and if I recall, it came down to about one roll difference.

The race for Player of the Year continues to swing around with every tournament – after this event, Dave’s 100% win rate suddenly pushed him above Kyle in total wins, and both Mark A and Bodger are still not far behind. It’s still anyone’s guess who will end up on top at the end of the year!

We will go back to our standard double-elimination event tournament structure starting next month as well, but I have lots of suggestions from people for additional events. Tim and Dave want more longer-match format events, Bodger wants to do a speedgammon tournament, Leah has suggested doing a doubles event. I want to try them all, it’s a question of how to fit it all in. I am going to two (2!) national ABT events next month – the Viking Classic in Minnesota, and the Denver Open in (checks notes) Denver. As a result, I’m limited on time to do an extra event real soon. We’ll see what come of it.

Speaking of ABT events – a handful of Portland area players are already members of USBGF (United States Backgammon Federation). You have to be a member to attend an ABT tournament – but there are other benefits as well, such as access to Prime Time magazine, educational videos, etc. If you not already a member, check it out – might be something you want to consider. Maybe we can get a substantial contingent to go to the US Open in Vegas this fall…

See you at the next one!