We had a great turnout for our unofficial satellite tournament – 9 people showed up to play. Mark S, who hasn’t shown up for a couple of years, came up from Salem; and I finally connected the dots that User 367848122 is Mir. David brought his (very nice) new board, and there were enough clocks to go around.

Nine is, you may know, one more than eight, which is how many people I expected/hoped for – so we started out with controversy and trouble right away by having a play-in round. Max and Paul drew the short straws for that, which meant Bodger had the short straw of having to wait for their match to finish before he could play at all.

Suffice it to say, there were delays.

In spite of that, some backgammon was played. David, Mark S, and I all won our first round matches. David and Mark S then played their second round match. In the meantime, Paul was getting the most out of his time bank in his play-in match against Max. When I started tracking, he was down to about 46 seconds of time bank left. At the end of the match, he had 8.8 seconds – and the win. Paul then sat down to face Bodger, and I joined into a lovely little chouette with David and Mark S. Mir and Kyle faced off in the preliminary consolation bracket, Tim and Max did the “play-in” of the consolation (so Max got stuck with two play-in rounds, which is a little rough), and we were hours in with very clearly hours to go to finish it out!

Paul beat Bodger, and then he and I were set to face off. Mark S negotiated a hedge with both Paul and I, that whoever he faced off in the final would just split the prize money 50-50, then conceded the final and asked for his payout.

My match against Paul ended up being very interesting, especially in cube action. Here’s two cube decisions from a critical game. I’m leading 5-1 at this point, and holding the cube at two. 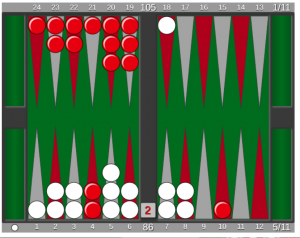 The critical thing here is that I’m leading 5-1. I redoubled, Paul snapped it up, but it was a massive -0.262 triple-blunder to redouble here! In a money game, or an even match score, this is a fine cube; but giving up the cube gives him the potential for a very powerful recube. If the cube was centered, it would even be a fine initial cube.

I am still, obviously, wrapping my head around the complexities of the cube in certain match score situations. For instance, this position, which happened a few rolls later. I’m still leading 5-1, but now Paul has the cube at 4, and I had been forced to leave him a turn-around shot… 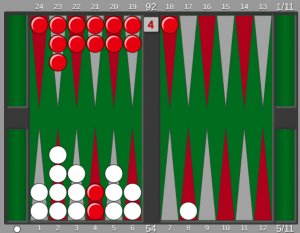 Paul credited his tutor for teaching him about this position, which I still can’t fully comprehend. One day…

I fought my way partly back, but ultimately lost the match to Paul 11-7. So Paul ends up as our main bracket champion, with Mark S in second.

The fun will continue in one week, when we reconvene to finish the consolation bracket. We will start off with me facing off against Mir, and David playing Bodger. It should be a logistically and timing-wise much easier affair, so come out and watch and join in some of the post-match chouette/whatever else. See you there!