Last weekend, I went to the Denver Open Backgammon tournament. Portland had a good showing at the event – with Bodger and Mary also attending the event. In fact, the first match I had ended up being against Bodger, and we laughed at the irony of coming all the way to Denver to play one another.

That match almost ended up being one game long. It was a match to 7, and in the first game, the cube made it up to 4. I had Bodger on the ropes, until a late hit put me on the bar, and he threw the cube back to me at 8. 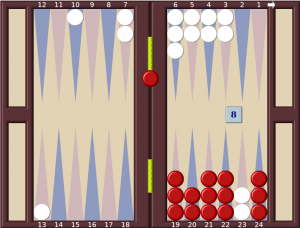 The situation is, of course, bad. The question is, how bad? All I have to do is enter, get that back checker around (without getting hit again), before he manages to get his two checkers out and around. If I still had my bar point, it would even be a take – but it is a drop, and I did drop. That didn’t do me much good – I was down 0-4 in the match and Bodger was able to clean me out with a few more games. But at least I made it past game 1.

Doubling decisions are a theme of the photos I took over the weekend, naturally. Here’s one where I had to decide whether or not to redouble. This is from a 9-point match, and I trailed 0-3. I had been shipped the cube earlier, and had turned it around to this position. 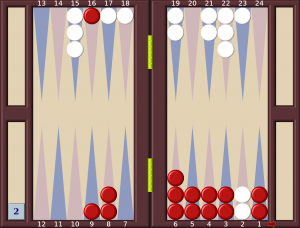 Leading up to this, my opponent (Patrick) had been trying to bring his checkers in, and I had been trying to get my back checkers out of his home board. I had given up on hitting any more after he got his first checker in, and escaped as he got his second checker in. So it was decision time – cash the position, or play on for the gammon? It is obviously a massive drop for him, with my next roll likely running past his 15 point and bringing the blot on the 9 point to safety. I can still get a fair number of gammons by playing on, either with some big rolls or by potentially getting hit and picking up some additional checkers. Eventually I decided on cashing the position – which is… really borderline. GnuBG says it is too good to redouble by 0.001, while BGBlitz says to not redouble is a -0.003 error. Really can’t go wrong here.

Many of the pictures I took ended up being ones where I did, ultimately, make the right decision. This next one is not one of those… This is from a 9 point match, where I am trailing 3-7, and as you can see, the position is one where I’m in a bit of trouble. I don’t think the score really comes into the decision however, it’s just a question of what should be my game plan. 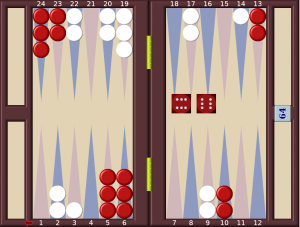 After the match, my opponent said he thought I should have played 13/7(2), 10/4(2), putting everything on containing his back checkers. I looked at that option. However, I was thinking the position was basically like a nackgammon game. If you haven’t played nackgammon, look it up – but the critical thing early in nack is keeping and improving the connectivity between your back checkers and the rest of the board. I couldn’t see leaving the 13 point, because then the back checkers are completely isolated from the front checkers. So 24/18(2) or 24/18(3) seemed like an absolute necessity – and that top 10 or so possible moves all include that. I finally landed on 24/18(2), 24/12 – hoping to strengthen my outfield position. The top move is 24/18(2), 10/4(2) – doing a little of both connecting and containing. Seeing it now, it seems obvious. But, on roll-out, my choice was only a -0.230 triple blunder. Much better than my opponent’s recommended -0.357 choice. Glad I didn’t listen to him!

Not to say that is the only position I captured where I made a mistake. Consider this cube decision: 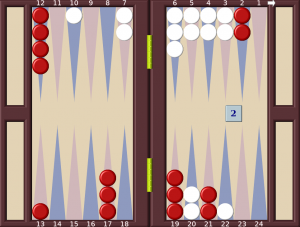 This came out of an 11 point match, where I happened to be leading 5-3 at the time. At a normal score, say 2-2, this is a double and a take. But since I am ahead in the match, this was a pass, a -0.087 blunder to have taken. Why? Well, he has almost 70% winning chances, and over 20% gammons. If he wins one of those gammons, I would be down 5-7, so he’s 4 points away from winning, which is a very favorable place to be. I don’t mind this blunder so much, I think getting the nuances of match score on cube decisions is one of those things that comes last to most people as they get better at backgammon…

Here’s another position from that same match. 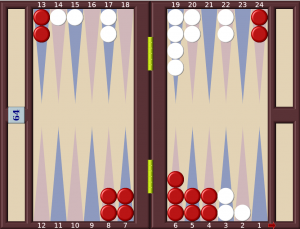 I’m now up 7-4 (so 4 points away for me, 7 points away for him), and I had to decide whether to double or play on. I’m in good shape for sure, my main liability being that my back checkers are still stuck on his ace point. But the race is surprisingly close, and I talked myself into being scared of some awkward rolls, and did not double. It’s a fairly big double (-0.055 error to have not shipped), and an easy take. I then rolled 62, and misplayed it 13/5 instead of 24/16. Just to try to pack some more blunders into the same 30 seconds, I suppose.

There are a few more positions I could post, I guess, but this is getting fairly long. Bodger did very well for his first ABT tournament, going 4-3 for the event. Mary didn’t fare quite as well, but I think she had fun and learned a lot from the experience. Bryan (from Seattle) was there as well, and ended up cashing in the consolation bracket. So overall, a good event for the Portland crew.