We had a record turnout for the Chouette this month – 9 people! I was hoping we would break into double digits, but maybe next month. Mark F, fresh off his second place finish in the Chicago Open Master’s, was feeling peppy going in, and he was in charge of the “advanced” board. He asked me not to mention how he did, you can draw your own conclusions there. Julie took over the “beginner” board, where she held the box for a long, long time against newcomers Tanya and Ted. They had a lively time with lots of discussion about the best moves at each point. That left Gints and I on the “middle” board, which, if you count carefully, does not equal a chouette. But we had fun anyway.

Gints and I are pretty evenly matched at backgammon, and we ended up taking pictures of a LOT of positions for later analysis. The ones I took, I have to say, most of them were not that close – I was offering doubles much too early and accepting them much too late. But occasionally, they were interesting, as in the following: 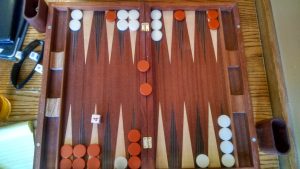 Here I’m red, Gints is white, I have two on the bar and am being redoubled. Would you have offered that double? Would you take in my place?

The race is actually pretty even, he’s up 132 to 143. My risk is, nothing is especially holding him back at this point. He has 4 and 6 to hit my blot in the outfield, worst case scenario is bring the back checker around. Seems like a pass to me, and it is. In fact, it is too good to redouble! Winning chance is at 76%, but 44% is gammons. GnuBG says no double has equity +1.117, XG says +1.141. I’m about to get buried here, and I took the chance to drop. If you don’t think about the gammon chances, it seems like a close call, but the majority of the losses are gammons, and since the cube has already been turned, they count.

Anyway, a good time all around – we’ll do it again next month!