Turns out, it was zwikelmania on the 18th. As a result, Lucky Lab was very crowded. I showed up a bit before 1:00, and set up next to the front door. Before 1:00, a group of people started playing darts right behind that table. There was a lot of traffic, but not obviously anyone looking for backgammon. After a while, I went and walked through the bigger room, and found Dan, who had been sitting around waiting for someone else to show up too. We moved back to the front table and played a money game for an hour or so, took a break for Dan to deal with a little work, then settled in for a chouette with the arrival of Rob and Martin about 3:00.

Well, I was already way down due to Dan’s excellent dice throwing skills, and the arrival of backup just meant that someone else got to lose with me. Dan held the box for two full cycles at one point, making bank off us. Still, I had fun, and we even had a random stop-by pick up one of the postcards: Mel, who learned to play in Turkey, and who challenged me to a couple of just for fun games.

At one point, playing against Dan, I faced the following decision: 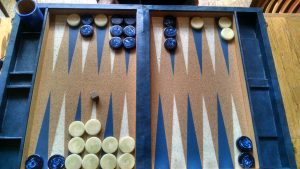 That’s the doubling cube being offered to me. Now here’s where psychology comes into the game. Mathematically, this is a no double and an easy take. But we were in the 5th game or so in a row where Dan had whipped me. 1’s, 2’s, 3’s, and 4’s hit, 5’s and 6’s escape a back checker. And I hadn’t had a good roll, nor Dan a bad one, so far this game. In spite of his odds being only 0.567 (according to gnuBG), I passed.

Let me tell you, failure of confidence can get expensive.

We’ll be back next month – maybe a few more new people will show up to take some of my money off me. Hope to see you there!