I spent this past weekend in Las Vegas for the 2022 US Open. Historically, I have been going to the Las Vegas Open in the fall since I got serious about backgammon tournaments, and I had planned to go to the US Open for the first time back in 2020. Guess what caused me to put that one off for 2 years, if you can…

I had an early flight down on Thursday, and got to the Golden Nugget just about 11:00, as the Calcutta auction was starting. By 1:30, I was playing in my first match. My opponent was named Ward, currently from Hawaii, but previously from Bend, Oregon. There were a couple of cube positions in that match that I recorded for posterity.

In the first, I am down 0-2 in our match to 11. After an unlucky sequence, I have two checkers on the bar, and Ward went looking for a quick win for our third game. (Here we’re bearing off to the left) 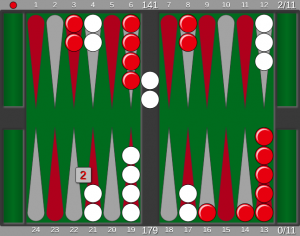 Looks fairly dire, but: he only has two points made on his home board, and not a lot of checkers in the zone. He’s not a favorite to make a third point on this next roll, and I have an anchor. Plus, I’m down 0-2, so I need to make something happen. It was an easy take; and in fact a no double. At 0-0, the computer says it would have been a close no double, but as is, a fairly big no double/take. I took, and turned the game around to get on the board.

Roughly an hour later, we got to this position, where I am the one offering a dubious cube. The score is now 9-3 to my advantage; or 2-away, 8-away if you prefer. Winning a gammon here wins me the match, and giving him the cube gave me a lot of pause for thought. If he took, he should automatically redouble, and then a gammon loss hands the match to him! So it was not an easy decision. 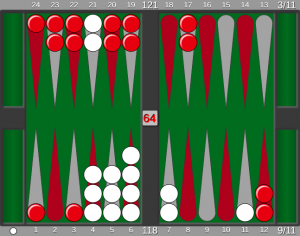 At a normal score, say 7-away, 7-away, this is a double/pass. At this score, a HUGE no double/take. I have 35% or so gammons if I play it out. But, I doubled, and he passed, and so it took me two more games to win the match.

After that rousing success, I got suckered into joining the intermediate jackpot as well. In the first round of that, I got into a similar kind of situation. Here I’m leading 7-6, in a match to 9; so 2-away, 3-away. (This one is bearing off to the right…) 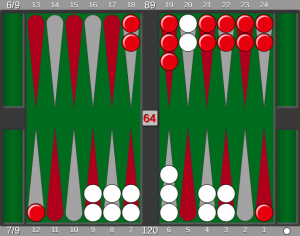 There aren’t so many gammons as the last position, but what I could tell was different was his wins after the automatic redouble. Earlier in the match, this would have been a fine double/take. Now, it’s a pretty big no double/take. Fortunately, on this one, I did not make the massive blunder and played on (to eventually win that match as well).

My next match in the jackpot brought me back to humility, as I started out down 0-2, caught up and passed to 7-4, then eventually lost 7-9. It was a fun match, but I didn’t take any positions for later reference. In fact, I took as many pictures in those first two matches as I did the rest of the weekend! The rest of them were relatively straightforward, though, and I don’t want to drag everyone through every match I had all weekend…

In the main event, I got knocked down to consolation after my first match on Friday, but then advanced to the round of 8 in that before getting knocked out. In the last chance, I busted out in the first match. This position is (approximately) an important decision I faced in that one, but a checker play. Hit, or jump past? 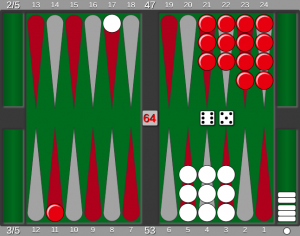 The problem with hitting is, what if you get hit back? On the other hand, my opponent has two open spaces on their board, so I might just pop right back out. On the other other hand, I might dance multiple times after the return hit. It’s never easy… I went with no hit, which is… MASSIVELY CORRECT. Hitting is a -0.324 quadruple blunder. Except that I ended up losing the game anyway, when my opponent rolled double 5s and then a multitude of doubles (she went on to second place in the last chance). 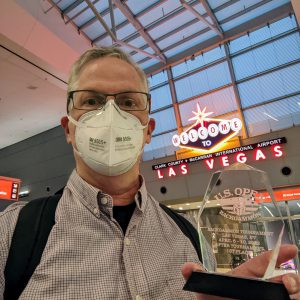 I also brought home a pile of brochures for future events to share with the Portland backgammon club. I am not sure what my next national event is going to be – there are a lot of good ones! I got a couple of asks about when the next Portland national event is going to be, to which I say: sigh. Someday I will have that much energy again, but probably not for a while.