I went to Minneapolis for the labor day weekend Viking Classic, not without some trepidation and mixed feelings due to the whole pandemic situation. But, Minneapolis is doing better than Vancouver/Portland in terms of vaccination rates, case rates, etc., and there was a strict vaccination requirement, so I went ahead anyway. Just for an extra precaution, I did stay masked for 99% of the event – I did remove the mask for the trophy pictures (spoiler alert!)

It was an early flight out on Friday, but it got me in with time to grab lunch before sitting down for the first event I signed up for: the Friday Frigga, a 7 point match. This is a mixed level event, so I was up against Open players. First match had me down 0-6 after two games, but I survived the Crawford game and came back to win. My second match was much shorter, ending after game 1 with an 0-8 loss to the famous CJC. Here’s the position where I lost the match: 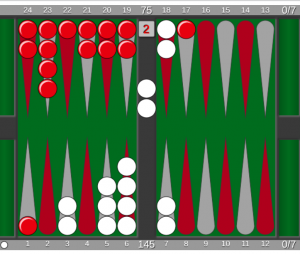 Looking at this, my thinking was, she only has 5’s to cover, then needs a 1 or a 3 to set up for the escape, so all even numbers are problems. Even if she rolled the perfect 5-3, a small next roll starts to crunch her board and so I have decent winning chances. So when she offered me the 4 cube, I took it! After taking a picture, of course. She then expressed shock that I had taken the cube, and I knew I was in trouble.

I do, in fact, have decent winning chances – about 32% wins. She, on the other hand, has about 50% gammons. And she got one of them, knocking me out of the event. Ah, well. It was a good lesson to think about the downside of taking the cube as well – CJC pointed out how many gammon wins she had, and how that was missing from my thinking.

The next day, the main event started. I had a pretty good run, getting a first round bye, so a very smooth start to the day. Rounds 2 and 3 were a little harder. Round 4, I had one of those experiences that makes you wonder why we play this cursed game. It’s a 9 point match, and I’m trailing 3-4. Conscious of the blunder of the day before, when offered the cube I correctly recognized that my downside if I were to lose a gammon in the following position would take us into the Crawford game – a bad outcome, but not as bad as losing the match. So here’s the position: 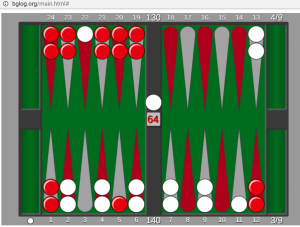 Here’s my thinking: she’s got no direct cover for her 3 point, and 3 checkers back on my homeboard. I should have 2 or 3 rolls to get a 3, anchor up, and then I’m right back in it. And again, I am about 32% wins, she’s got fewer gammons than that first position at 45% or so… And it’s still a huge pass. To cap it off, her next roll was 5-5, hitting and covering on her 3 point, followed by a 4-6 picking up the third checker. I kept waiting for her board to crunch, and did get a couple of shots at blots once she started bearing off – all of which I missed. Lost by a backgammon, putting that match to a sudden end. 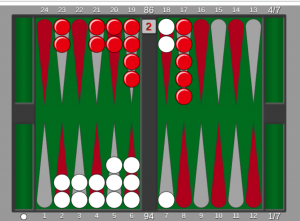 I was very careful counting this position out – triple checking. I’m 8 pips down, which is close to the break-even point for a pass/take in a money game. But here, if I drop, we’re in Crawford and my match winning chances are in the low teens. So this is a very easy take, and the computer says it’s a huge blunder for him to have offered the cube. But then, 27% winning chances is no guarantee. I had trouble finding any numbers higher than a 4 on the dice for the next 10+ rolls. I didn’t throw the cube back to him until 2 or 3 rolls later, at which point I was well under 27% winning chances, but he had some lousy rolls those next few as well. Fortunately, since this was the game before one of us guaranteed to cash, I had set up a hedge with him beforehand, so I got part of my entry fee back at least.

Oh, right – I mentioned a trophy! I did win the “Advanced Valhalla”, a jackpot event for once you were knocked out of the main, and got to bring home a lovely goblet trophy. Coming home with a trophy was one of my main goals for the event, as April and Michael really go over the top in terms of trophies for their event. It was only an 8 person bracket, so it’s a bit much to have gotten a trophy for, but I’m happy about it! It was a nice way to end the tournament. Technically it was the penultimate match of my trip – I had the same guy for both the championship for Valhalla and the first round of the consolation bracket for the main, and lost out of the consolation right after winning the Valhalla. Still: trophy.

Overall, it was a great time, and got me thinking anew about the possibility of doing a bigger event again in Portland. So much work goes into an event like that, I cannot commit to making it happen at this point. But gosh is it a good time to attend one! Over 4 days, I played well over 30 hours of backgammon, most of my opponents were very nice (everyone was gracious in victory – in defeat was a little spottier…) and it was a just a great time. I hope to go again next year.